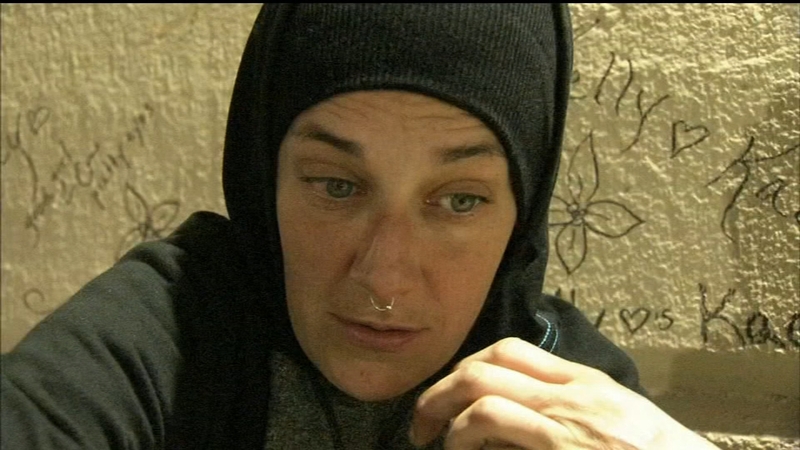 PHILADELPHIA (WPVI) -- Ground Zero of our local heroin epidemic lies in the heart of Philadelphia's Kensington section, where drug users line the streets in makeshift tents throughout the neighborhood.

Until a few months ago, the homeless population here lived on a stretch of railroad known as "The Tracks." But in September, Conrail purged the area of all remnants of the drug users, pushing hundreds of homeless onto Kensington's streets...

To an area called Emerald City.

The encampment, spread out under three bridges in Kensington, shares nothing with the famous fantasyland in Oz but a name. This is the harsh reality of life as an addict on Philadelphia's streets.

"It's really bad. It's not like back in the day when you'd be able to go down to the tracks and you didn't have to worry about getting robbed or dying," said Melissa Finley.

This is now what the 34-year-old woman, formerly of Delaware County, calls home.

"Never in my entire life would [I] think that I would be living in a tunnel."

Melissa Finley, a 34-year-old woman who is among the scores of people living in a drug-infested section of Kensington known as "Emerald City" shares her story.

This Emerald City is at the Corner of Emerald and Lehigh Streets. It's a place where dreams for a future, and countless addicts, die.

One user, who asked us to call her Kelly, had just gotten high before we talked to her. But the former college student and athlete says it doesn't stop the pain of remembering what she's lost.

"I was stupid enough to think I was smarter, smarter than them, so to speak, and that I just wouldn't end up out here," said Kelly.

But there are people like Samuel Santiago who are out there trying to help.

"We don't want people to die. They are too young. They still have their whole life ahead," he said. Santiago has been working outreach in Kensington for 19 years.

"These people, all they are thinking about is 'when am I going to get high?" he said.

His team from Project Home walks these streets every day, hoping there is one person who will go into treatment.

On a five degree day a few weeks later, we run back into Kelly, still living on the streets.

"It's not much better. Actually worse, a whole lot worse, with the cold. It's brutal," she said.

This time, the police arrived with the Streets Department for a weekly cleanup.

"Human feces, any other trash, needles, anything else that is underneath this bridge to make it unsafe, we make it safe again," said Inspector Ray Convery of the Philadelphia Police Department.

The officers aren't here to arrest anyone. The "residents" are allowed to take what they want, and the rest is thrown away. But shortly after the cleanup is completed, the users take their spots under the bridge, and the cycle starts all over.

Police say the much larger issue is stopping the addiction. Both the day we were out with police and with outreach teams, they were successful in getting someone to go to a shelter.

They say this is not hopeless, but the problem is too big for them to solve alone.