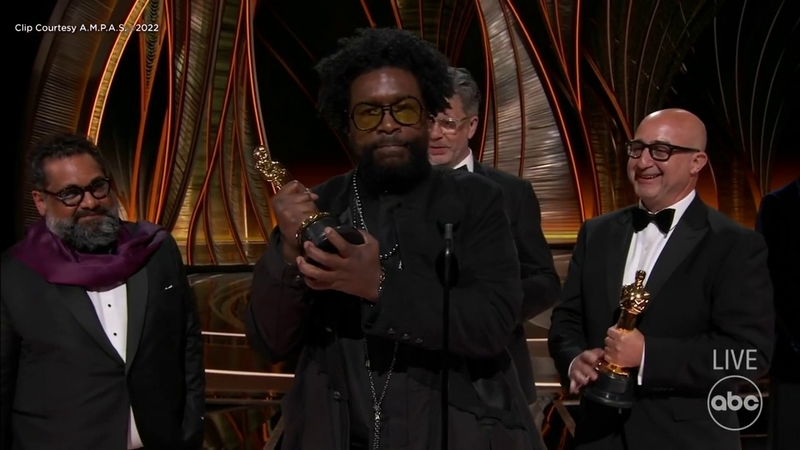 PHILADELPHIA -- Though the most talked-about moment of the Oscars took place mere moments before Ahmir "Questlove" Thompson won his Best Documentary Feature Oscar for "Summer of Soul," he accepted the award with grace and reminded audiences of the significance of his documentary's subject matter.

The film centers around the largely forgotten Harlem Cultural Festival, which was filmed in Marcus Garvey Park (formerly Mount Morris Park) in Harlem, New York, over the summer of 1969. The event celebrated Black history, culture and fashion over the course of six weeks.

"It's not lost on me that the story of the Harlem Cultural Festival should've been something that my beautiful mother -- and my dad -- should've taken me to when I was 5 years old," the musician and filmmaker said, choking up when he mentioned his father.

RELATED: Questlove: Oscar-nominated 'Summer of Soul' is a film his younger self would have wanted to see

"Overwhelmed" by the win, the Philadelphia native said he'd reserve his thank-yous for offstage, but ended his speech with, "I'm so happy right now I could cry."

Read his full acceptance speech below:

Oh my God. Thank you.

First, I'd like to acknowledge "Attica," "Ascension," "Flee" and "Writing with Fire," for their powerful work.

It's not lost on me that the story of the Harlem Cultural Festival should have been something that my beautiful mother -- and my dad -- should've taken me to when I was 5 years old and - this is just a stunning moment for me right now.

But this is not about me.

This is about marginalized people in Harlem that needed to heal from pain.

And just know that in 2022, this is not just a 1969 story about marginalized people in Harlem.

Look, I'm gonna get myself together and I'll thank everyone proper when I get off stage, but on behalf of Hulu and Searchlight (Pictures) and Onyx (Collective), the beautiful women of Onyx, and Concordia (Studio) and Play/Action (Pictures) and Vulcan (Productions) and RadicalMedia.

And on behalf of (producer) Joseph (Patel) - and I'm so happy right now, I could cry.