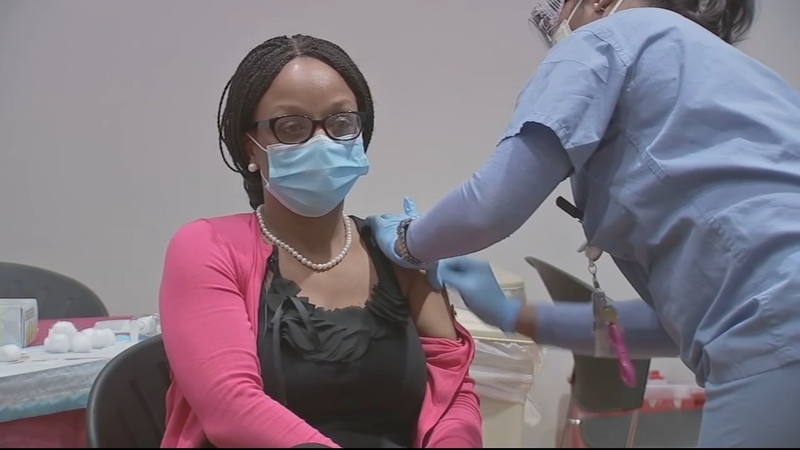 YEADON, Pennsylvania (WPVI) -- Some Delaware County leaders are frustrated over how doses of the COVID-19 vaccine are being divided throughout the state, and argue that the county isn't getting its fair share.

An analysis by the Action News Data Team shows some of Philadelphia's suburban counties are being vastly short-changed on vaccines.

By comparison, the state reports having sent almost 45,000 doses to Montour County, population 18,259, over the last three months. Four other smaller counties, Mifflin, Mercer, Clarion and Elk, all received more than 500 doses for every 1,000 of their residents according to state data. Out of 67 counties, Delaware County is ranked 46th.

"We have been complaining to Harrisburg. We have been speaking with our state reps and senators to say that we believe that Delaware County is not getting its fair share of vaccine," Zidek said.

Zidek said the county is facing a major problem.

"I have not, other than what I read in the newspapers, which says they're going to fix the issue but they have not communicated with us in any manner," Zidek said.

The Pennsylvania Health Department responded Tuesday to 6abc's request for comment: The Department of Health is working on an in-depth analysis of vaccine distribution in the four collar counties and plans to share details later this week.

The Action News data journalism team also discovered that Bucks, Chester and Montgomery counties are undersupplied compared to their neighbors.

"That doesn't make any sense. I mean I would think we'd be prioritized," said Jason Avalone, of Springfield, Delaware County.
Democratic State Senator Anthony Williams stated that the second week into the vaccine distribution, they started to see there was a discrepancy. At first, they believed there was a mistake on the counties' end but later realized that was not the case.

"We were told to trust that states would set up a system that was fair and equitable, factored in communities that were underserved and balance it based on that," said Williams.

Congresswoman Mary Gay Scanlon tweeted in response to the difference in numbers: "I just got off the phone with the State Health Department concerning the undersupply of COVID-19 vaccines in Delaware County. They will be sending additional doses to our region over the next couple of weeks to bring us in line with the state average."

During a state department of health press briefing on Tuesday, Lindsey Mauldin acknowledged Scanlon's tweet but would not specify exactly how many doses existed and where they would go.

"I think it's important to recognize every county is different and has their own set-up in terms of healthcare workers and population. But again, like I've said before, we'll continue to stabilize those numbers as vaccine numbers start to increase across the state and the country," she said.
Report a correction or typo
Related topics:
health & fitnessyeadon boroughhealthpennsylvania newscoronaviruscovid 19 vaccine
Copyright © 2021 WPVI-TV. All Rights Reserved.
More Videos
From CNN Newsource affiliates
TOP STORIES