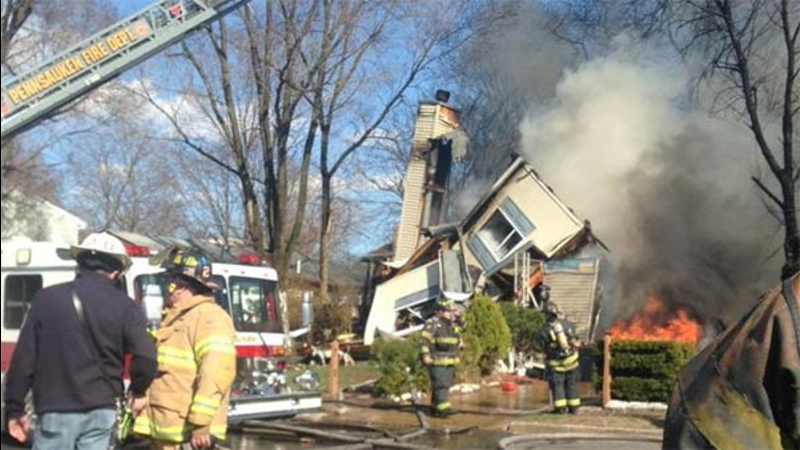 PENNSAUKEN, N.J. (WPVI) -- Flames tore through a two-story home in Pennsauken, New Jersey causing parts of the house to collapse.

It happened just before 3:30 p.m. Saturday at Union Avenue and Stow Road.

Firefighters were met with heavy flames upon arrival and smoke could be seen for miles.

"We came outside and looked down the street with just clouds of black smoke," said Sarah Murphy.

"I smelled it - so strong like it was in my own home. I looked out my window, opened up my front door and all I saw was black," said Chris Lusch.

About 50 firefighters responded to the scene.

The fire started in the yard but strong winds blew the flames to the house.

"It does just that - basically feeds the fire and it compromises our hose streams. You saw early on some of our exterior hose lines were fighting the winds along with the fire itself," said Fire Chief Joseph Palumbo.

Action News was on the scene as part of the home caved in.

The family who lives in the home were away but they made it back to see the damage.

Action News has learned, unlike this time, this house survived another fire in 2006.

The home belongs to the mother of volunteer firefighter Kevin Sochanchak.

Sochanchak is battling stage 4 stomach cancer and lost his father to cancer two years ago.

Action News was there as the community held a benefit for the son back in November.

Neighbors say they're sure people will step up for his family again.

"I know for sure everyone will come together and put efforts forth helping them," said Murphy.

A GoFundMe page has been set up for donations to the family.

Fortunately no one was injured but the family's Chihuahua Sophie was inside and perished in the fire.

The fire was brought under control in a little more than an hour.

Firefighters say there was a lot stored on the property and inside the home which also fueled the flames.