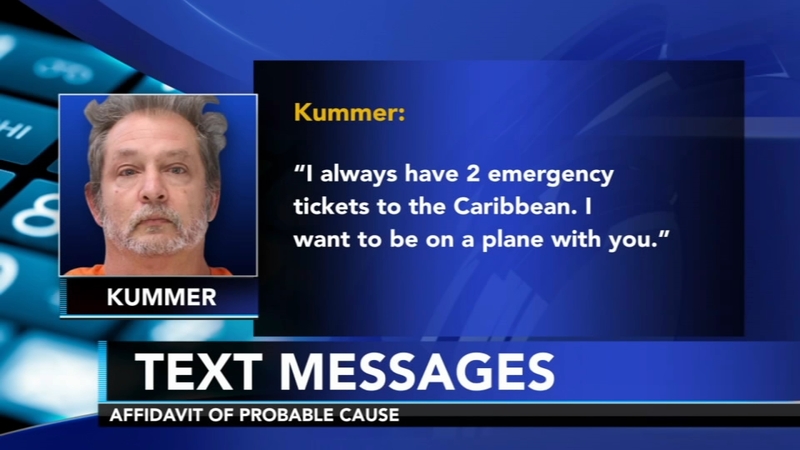 ABINGTON TWP., Pa. (WPVI) -- A Latin teacher at Abington Senior High School in Montgomery County has been arrested after being accused of inappropriate sexual contact with a student.

Fifty-five-year-old Thomas Kummer of Willow Grove is facing five felony charges including corruption of minors, unlawful contact with a minor, photographing, filming, or depicting a sexual act on a computer, endangering the welfare of a child, and institutional sexual assault of a minor.

Kummer was arraigned on Monday morning. He is being held on $250,000 cash bail.

The offense allegedly happened while the two were part of a field trip to Italy over the summer, investigators say. Kummer was a chaperone on that trip.

Police say there were some 290 pages worth of messages between the two that were "romantic in nature." Compromising photos of the minor were found in the evidence, authorities say.

Police released some of those alleged text messages in an affidavit of possible cause.

Abington teacher Thomas Kummer arrives for his arraignment on October 1, 2018.

Another reads, "I always have two emergency tickets to the Caribbean. I want to be on a plane with you."

Kummer apparently became concerned he had not heard from the girl over the last several days. He allegedly reestablished contact on Sunday.

Hearing police were investigating he allegedly asked the teen if officers had a search warrant, and wanted to know if she had deleted earlier text messages.

The affidavit suggests a growing sense of panic.

"I'm thinking should I run now. Like, I'm afraid to go to school on Monday. I'm completely freaked out," one message reads.

Kummer, who did not have an attorney present, made an appeal to the judge for lower bail. He told the judge he was a respected member of the Abington faculty and had been for 23 years.

He also said he is a caregiver for his seriously ill father, and his daughter, a college student, depends on him. He vowed not to run away.

The judge denied that request, saying the allegations against Kummer are serious, and he was a flight risk because of the potential jail sentence he faces if he is convicted on the charges against him.

Assistant Superintendent of Schools Jeffrey Fecher posted a letter on social media alerting parents of the arrest. The letter states Kummer was suspended from his teaching position immediately and that the school district is cooperating with police.

This is not the first time Kummer has had a run-in with the law. Back in 2000 he was charged with simple assault and terroristic threats. He was able to go through a program for first-time offenders and the charges were nullified before there was a conviction on the books. He did not have to report it to the school district.

Abington Senior HS teacher Thomas Kummer is in custody tonight, facing charges including unlawful contact with a minor and institutional sexual assault. (He was interviewed by @6abc earlier this year when a former student and marine was killed.) Kummer has been suspended. pic.twitter.com/cjjDx0uuV8