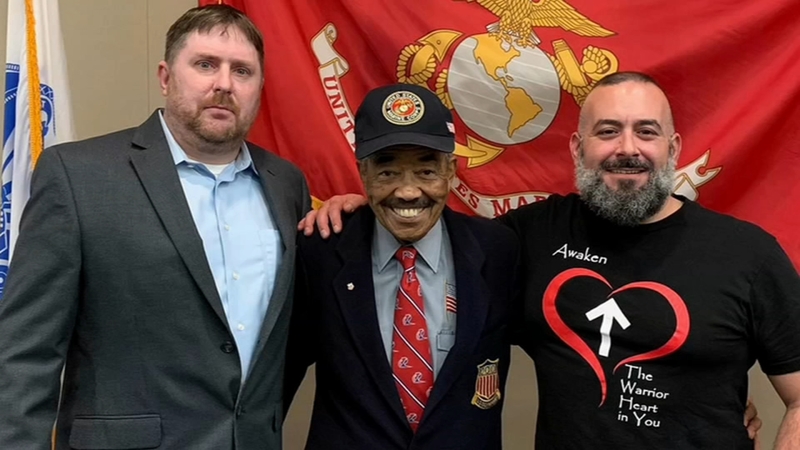 NORTH WALES, PA. (WPVI) -- A Marine Corps veteran and former Olympian in Montgomery County is getting the needed help for repairs at his home.

And when one non-profit that assists vets saw how much work needed to be done, they called others to help.

The roar of the chainsaw pierced the cold air outside this home in North Wales, volunteers making necessary repairs. Inside, 86-year-old Josh Culbreath, an Olympic bronze medalist, and a U.S. Marine Corps veteran.

"They volunteered when they saw my house was crumbling," he said.

It all started when John Notte of Warrior Heart heard about Dr. Culbreath.

"When I come across an individual I feel exemplifies a warrior heart I go ahead and feature their story, get them a patch or a t-shirt, and I try to do something nice for them. Sometimes it turns into a really big project," said Notte.

Notte contacted Home Depot, which brought in Habitat for Humanity, and from there a number of groups have come to donate time and resources.

Habitat for Humanity Caleb Derby said, "We just replaced his roof, gave him a heater because his heat wasn't working, he had mold overgrown everywhere."

It's quite a story, for a man with quite a story. Dr. Culbreath grew up in Norristown down the street from Tommy Lasorda. He served in the Marine Corp from 1956 to 58 and won a bronze medal in the 400-meter hurdles at the Olympics in Melbourne, Australia while on active duty.

"I went through all my training that I normally would have done. I did want to be a Marine that had come there to become a runner. I was a Marine first of all," said Dr. Culbreath.

Dr. Culbreath was inducted into the U.S. Marine Corps Sports Hall of Fame, coached college track. He earned his Masters at Temple, and it was his work with special needs children that is perhaps the most meaningful to him.

For these volunteers, helping Dr. Culbreath is just one way to say thank you.

"There's a Navy Vet over there running the chain saw. I have a Vietnam Vet breaking gravel with me, and a lot of people chipping," said Notte.