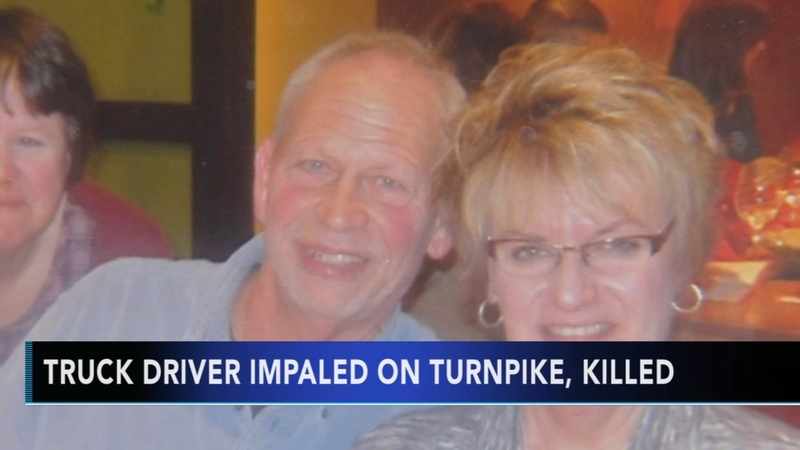 Part of the Pennsylvania Turnpike's Northeast Extension remains closed Thursday morning because of the incident.

The beam fell inside the Lehigh Tunnel around 6 p.m. Wednesday.

The Lehigh County coroner said Howard Sexton, 70, was pronounced dead at the scene.

The coroner said Sexton, of Mickleton, New Jersey, was driving a tractor-trailer when a metal conduit fell from the tunnel, broke through the truck's windshield and hit him in the head.

Remarkably, the tractor-trailer continued southbound out of the tunnel for a distance of a mile before coming to a stop along the highway.

Initial police activity focused on other vehicles in the tunnel that sustained only minor damages.

Sexton's body and his truck were not found for about three hours. Police said it was located only after Raymour and Flanagan's requested a welfare check on the driver.

The crash closed the southbound lanes of the highway from Mahoning Valley to Lehigh Valley, causing a major traffic backup Wednesday night.

Motorists approaching the Lehigh Tunnel (I-476 MP70.7-71.6) will encounter two-way traffic in the northbound tunnel while crews work inside the closed southbound tunnel. Stay alert and use caution. @PA_Turnpike #paturnpike

The turnpike authority said the tunnel was last inspected in September 2016. It would not say if there had been any recent work done in or around the area where the materials fell.

Earlier Wednesday, several trucks were involved in a collision on the Northeast Extension in Bucks County.

NE Extension reopens after serious crash in Bucks Co. Watch this report from Action News at 4pm on February 21, 2018.

It happened shortly after 10 a.m. in the northbound lanes in Milford, Pa. between the Lansdale and Quakertown exits.

It took nearly four hours for crews to clear the damaged vehicles from the scene.