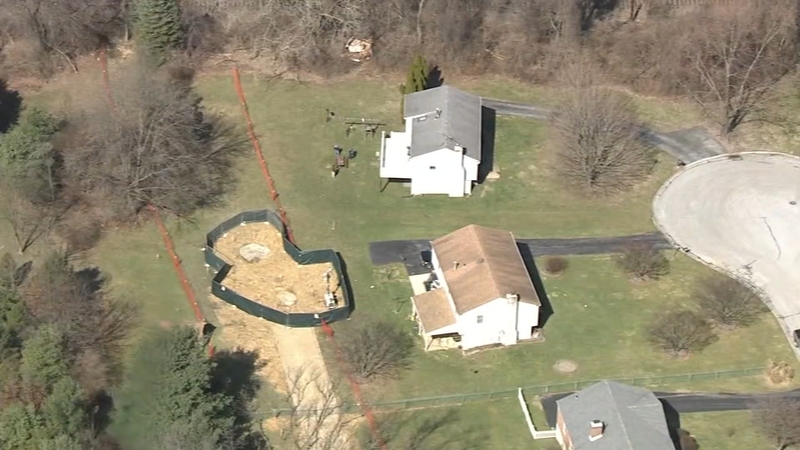 Neighbors concerned after latest sinkhole related to ME-1 pipeline

WEST WHITELAND TWP., Pa. (WPVI) -- One day after a sinkhole opened up in a Chester County backyard, exposing the pipeline known as ME-1, workers assessed the situation and prepared to bring in equipment.

It's just the latest chapter in a long saga involving the Mariner East One Pipeline.

According to the Public Utility Commission, the work being done behind a home on Lisa Drive in West Whiteland Township Monday afternoon is to stabilize the area. Engineers and geologists will then determine how to proceed with the sinkhole.

Meanwhile, neighbors in the area are upset that they have to deal with yet another sinkhole related to the Mariner East Pipeline.

From the Mattia family's backyard you can see the work happening two doors down.

"It leaves a big concern as to what's going to happen next. They try to repair things and do a very good job of covering things up I believe," said Jason Mattia.

In a statement, Sunoco said there was no impact to the pipeline, which had been carrying liquid fuels. But the line was shut anyway out of an abundance of caution.

The Mariner East Pipeline saga has many twists, including several sinkholes on this block in March of last year.

Last spring, a state public utility commission judge ruled that the owners, Sunoco and Energy Transfer LP, should stop work on Mariner East Two and shut down the use of Mariner East One.

But the following month, the Public Utility Commission voted 3-2 to resume use of ME-1, resulting in angry residents.

"This is about the health safety and welfare of our community. At this point it looks like we have a history of problems here," said state Rep. Chris Quinn, (R) 168th District.

"What we'd have to do with the legislature or the executive branch of government is have a total review of this pipeline and to have that review done by an independent authority who has nothing to do with either Sunoco or the Public Utility Commission," Dinniman said.

A Public Utility Commission spokesperson says they can't discuss any details on this ongoing investigation.

"Energy Transfer confirmed today that its Mariner East 1 pipeline was shut in as a precautionary measure on Sunday, January 20, 2019, due to the appearance of a subsidence in the area of Lisa Drive in West Whiteland Township, Chester County, PA. The pipeline is secure and the area stable. In cooperation with the PA PUC's Bureau of Investigation and Enforcement and its consultants, the parties have agreed that the Mariner East 1 line in this area will be purged of product while the subsidence is filled with specialized grouting to ensure it remains stable and geophysical testing is performed. Additionally, pipeline crews will actively monitor all Mariner East rights-of-ways in the area to ensure they remain safe and secure. There is no impact to the Mariner East 2 pipeline that runs through Chester County. Additionally, the 12" section of the Mariner East 1 Line that is in temporary use as part of Mariner East 2 is not located in this area. Marine East 1 transports natural gas liquids from Western Pennsylvania to Marcus Hook Industrial Complex in Delaware County, Pennsylvania."