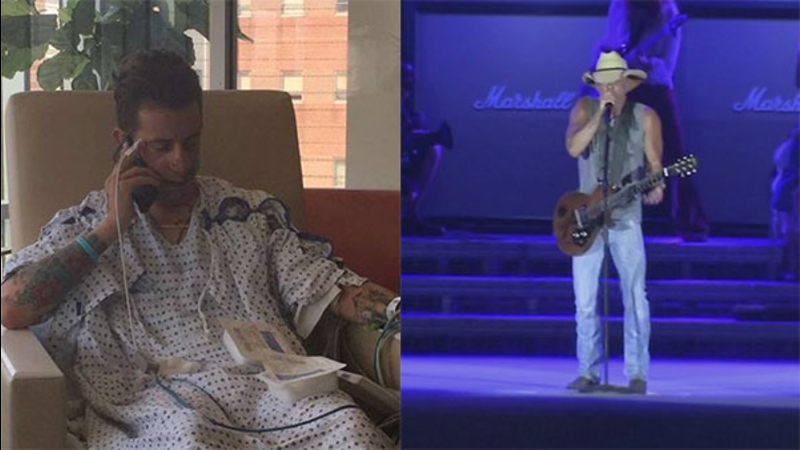 The Folcroft Police Department says Chesney apologized to Officer Christopher Dorman during a phone call Sunday morning and offered to take him to a football game "to get some beers."

@kennychesney told #Dorman he wants to take him to a football game and get some beers. #dormanthedelcolegend

The Folcroft PD sent Action News video of Officer Dorman speaking to Chesney on the phone.

"It was a great conversation, just in typical Chris fashion took it in stride, was laughing about things. They made some arrangements with each other," Folcroft Police Sgt. William Bair said.

In a statement released around the same time of the phone call, Chesney said he was caught up in the moment during his concert at Lincoln Financial Field when he said Dorman, who was shot seven times, passed away.

"I was so caught up in the moment," Chesney said, "I think the emotions got the best of me - and I wasn't as clear as I could've been."

Hours before the concert, Officer Dorman had two things on his mind when recording a video from his hospital bed: the emergency personnel who saved him and Kenny Chesney.

"I'd like to thank all the police, paramedics and doctors and hey Kenny, don't forget me," Dorman said in the video released exclusively to Action News Saturday morning.

Just a day after being shot seven times, Folcroft Police Officer Christopher Dorman released exclusive video to Action News to thank those who saved his life.

The 25-year-old police officer was planning to attend the Chesney concert later that night in South Philadelphia, but instead spent it continuing to recover from his injuries sustained in Friday morning's shooting.

"Before we get going with the rest of the show, last night, a Philadelphia police officer was shot seven times. In the hospital on his bed ... he passed away, but before he passed away, he made a video that he wanted to come tonight so bad, and he said, 'Kenny, please don't forget me,'" Chesney said.

Officer Dorman, however, did not pass away, and remains hospitalized.

Sources tell Action News he will be released from the hospital on Monday, and will be given a police and fire escort to his home.

Many took to social media with calls for Chesney to correct the mistake, including the Folcroft Police Department.

"@kennychesney just said that officer Dorman passed away...THAT IS FALSE. HE IS ALIVE AND WELL!!," the department tweeted.

@kennychesney just said that officer Dorman passed away...THAT IS FALSE. HE IS ALIVE AND WELL!!

They followed up with another tweet asking Chesney to "Make this right."

On Sunday morning, Kenny Chesney and his management team released the statement on the concert and Officer Dorman.

It says Chesney received word about Officer Dorman's video as he was dressing for the show and "it fired the East Tennessee songwriter/entertainer up to a whole other other level."

Hitting the stage just after 9, the 8-time Entertainer of the Year paused after "I Go Back," a song that captures the power of songs to hold life's special moments in amber, and said to the crowd, "I didn't know where in the show I was going to do this... But there's a line in this song that says, 'When I hear, 'Only the good die young, it still stops me in my tracks...,' and I heard that an officer here in Philadelphia who was shot seven times last night - from his hospital bed, he made a video that said, 'Kenny, don't forget about me.' Well, Christopher Dorman, we won't forget you..."

The statement goes on to say the crowd roared when Chesney said the officer's name.

For them, the story was personal - and the fact that Chesney knew - and lifted this moment to honor the police officer prompted an insane response. If the internet blew up at what seemed to be his comment suggesting the officer had passed, he finished the song he was singing, the plaintive "Anything But Mine," about yearning for a summer love past, and offered, "Christopher Dorman, wherever you are, this is for you..."

"The idea that a hero like that, with seven bullets in him, would even think about me... I heard about it right before I hit the stage, and it stopped me in my tracks. Someone whose life was on the line, and after all that bravery? As anyone in the stadium knows, I kept pausing, trying to collect my thoughts," Chesney said.

Chesney says Philadelphia has always been a place with loud fans and crazy tailgating. He says he and his band "have the time of our lives every year."

"And when I heard the cheer they sent up when I sent our best to Officer Dorman, man, everything I've ever thought about the people of Philadelphia was confirmed," Chesney said.

The country singer closed the statement by saying, "There are moments that it feels so damn good to be alive. Tonight in Philadelphia was absolutely one of them. To honor a policeman who survived something so horrific, to be rocked so hard by all those people, to see a city so alive, that's everything about why we do this! To Philadelphia, you have a lot of heart - and it was an honor to rock with you tonight and honor one of your own!"

The next tweet from the Folcroft Police Department came Sunday morning and said Chesney called Dorman personally to apologize and wish him the best.

"We knew as a police department, listen he didn't do this on purpose. It wasn't done in malice. He was misinformed. It was a mistake and he made good on it," Sgt. Blair.

Police tell Action News Chesney couldn't have been more gracious to the officer.

They say Dorman was "ecstatic" for the call and it lifted his spirits.

We found some folks who were at the Kenny Chesney concert Saturday night, and they say they can't believe what they heard during the shoutout. But they also say they're glad the singer tried to make it right with that phone call.

"I was videoing it and then once he said that he passed away I turned it off," said Jennifer Licata of Tinicum Township, Pennsylvania. "And the fact that he said he was a Philly cop."

"It doesn't make it right, but it definitely helps the situation. I mean, somebody should have told him what was going on beforehand," said Matt Pitts of Darby.

Dorman arrived on the scene and confronted Donte Brooks Island, aka Abdul Wahi, police say. There was a struggle and Island allegedly drew his weapon and shot Dorman seven times.

He was flown by helicopter to Penn Presbyterian Medical Center.