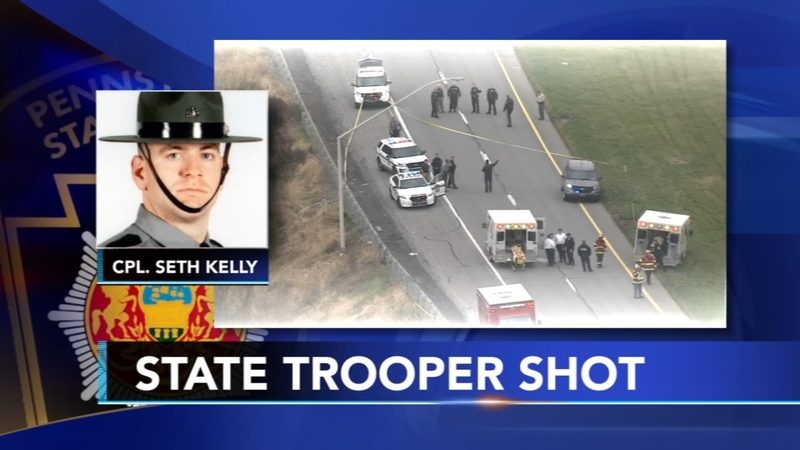 PLAINFIELD TWP, Pa. (WPVI) -- A Pennsylvania State Police corporal is in critical condition after being shot following a traffic stop in Northampton County.

Authorities say, after being shot, Cpl. Kelly, a 13-year veteran, used a tourniquet on his wounds which likely saved his life.

This is the tourniquet used by Cpl. Seth Kelly after he was shot multiple times yesterday during traffic stop. Had the wherewithal to apply it on *himself while in grave condition. Happen to have it on him. Troopers usually leave it in car. Now in critical condition @6abc pic.twitter.com/NIidxkcY2M

He is currently in critical, but stable condition in St. Luke's Hospital in Bethlehem. Kelly enlisted with the PSP in 2004 and is a graduate of the 116th cadet class.

Watch video of the Pa. State Police update on the shooting of a state trooper in Plainfield Twp., Pa.

Daniel Khalil Clary, 22, of Effort, was charged in the shooting.

Authorities say Trooper Ryan Seiple pulled over Clary along Route 33 near Route 191 in Plainfield Township around 10:15 a.m. Tuesday due to a speeding violation in what they called "a normal traffic stop."

Seiple, a 6-year veteran, issued a speeding citation and explained to Clary his next steps.

The trooper went back to his patrol car and began to pull away, when police say Cleary got out his 2008 blue Pontiac and flagged down Seiple.

The trooper got out of his vehicle and walked back to the suspect. Trooper Seiple ordered Clary back into his vehicle because police say they were on a busy roadway and did not want him to stay outside his car.

Seiple, 31, began to speak more with the suspect when he began to suspect Clary may be under influence of marijuana.

Seiple explained to Clary that he was no longer free to leave.

The trooper went back to his car and called for backup.

Cpl. Seth Kelly arrived on the scene to assist.

Police say both troopers performed field sobriety test on Clary, which he failed. They then announced he was under arrest for DUI.

As troopers went to handcuff Clary, police say he resisted arrest and the three began to wrestle between the two vehicles, as traffic went by.

People who drove by scuffle in the right lane of highway (route 33) between PA troopers and suspect called 911 to report it. @6abc

At some point, the suspect managed to get away from the troopers and ran around to the front of his vehicle. Police say he then reached into the driver side window and pulled out a gun.

Police say Clary went over the top of his vehicle and began to fire at the troopers.

Trooper hit in hand, back of neck, “side”, shoulder area. @6abc

Clary was able to get back into vehicle and drive himself to Easton Hospital, police say. Dash cam video from truck driver Robert Super's vehicle showed Clary's 2008 blue Pontiac with its back window blown out speeding off along Route 33.

Kelly was gravely injured and went over a guide rail while still firing at the suspect. Police say he had a tourniquet on belt and had the wherewithal to apply it to his wound.

EMS, police, and fire crews arrived on the scene.

Kelly was admitted in extremely critical condition to St. Luke's Hospital. He underwent emergency surgery and was listed critical, but stable.

Kelly has another surgery scheduled for later Wednesday evening or Thursday morning.

Soon, police received a call about a person with gunshot wound at Easton Hospital. That's where they found Clary.

The suspect in currently under police guard at Lehigh Valley Hospital-Cedar Crest. He was expected to be arraigned at his hospital bed.