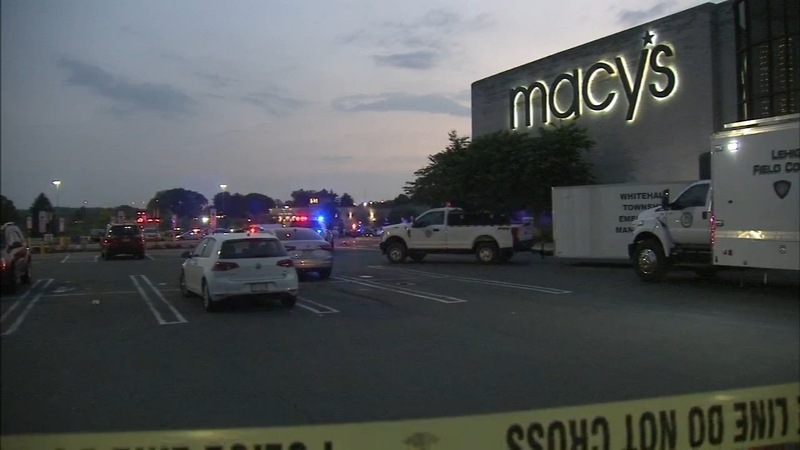 WHITEHALL TWP., Pa. (WPVI) -- At least one suspect is at large after a double shooting at the Lehigh Valley Mall on Friday evening.

Gunfire erupted around 7:10 p.m. in a parking lot of the shopping complex in Whitehall Township.

The gunshots were fired in the lot outside the Macy's store. The shooting may have been preceded by a scuffle inside the store, but investigators are still working to figure out if those two incidents are connected.

The two victims who were injured were taken to the hospital and were being treated. Police were not able to comment on the victims' conditions.

Investigators did not yet have a description available of the suspect.

Chopper 6 was over the Lehigh Valley Mall in Whitehall Township, Pa. after a shooting on June 1, 2018.

Kendra and Walter Brocius of Bethlehem had just arrived at the mall with their young children when the shooting happened.

"We had just pulled in, he had just opened the door to step out of the car when we heard it," Kendra said. "I'm like, 'get back in the car,' and he's like, 'what's that sound?' I said, 'Yeah, I don't know. It sounds like possible gunshots,' so we got back in the car and we locked."

"It happened so fast and you're trying to process it real quickly, but you realize once you saw some folks running through the parking lot that, hey, something might be going on," Walter said.

Officers ask that anyone who witnessed the incident, or who may have photos or videos of the shooting, to contact police at 610-437-3042.