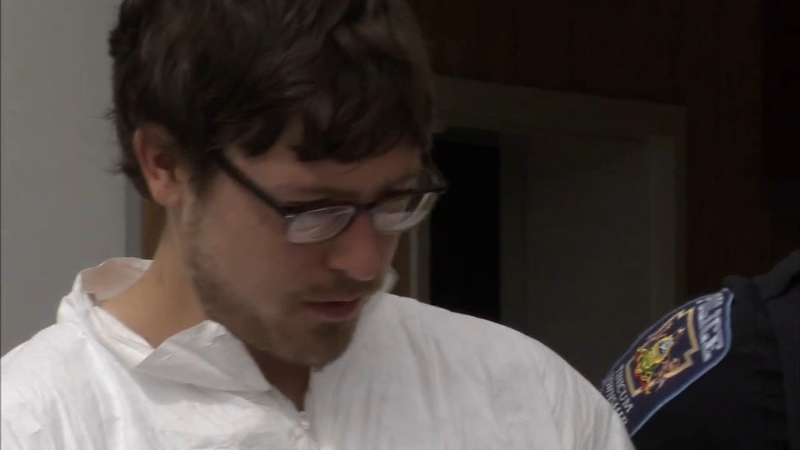 TINICUM TWP., Pa. (WPVI) -- A 31-year-old man has been arrested for shooting his parents in Delaware County, leaving his father dead and his mother in the hospital, police say.

Tinicum Township police took Matthew Hox into custody around 3 a.m. Friday. He has been charged with murder and attempted murder.

He is accused of shooting his father and mother, 77-year-old Henry "Hank" Hox and 62-year-old Donna Hox.

Hox's father was pronounced dead at the scene. His mother is recovering at Crozer Chester Medical Center.

Police say it all started Thursday night with what they believe was a family argument at Hox's home along the 400 block of Iroquois Street.

Next door neighbor Maryellen Kavanaugh said the horror began around 8:30 with muffled screams and incessant banging on her wall.

"I ran over because it was just too much. I ran over next door," she said.

According to court documents, the son was on top of Hank Hox when he pulled a gun from his father's holster and shot him twice in the back.

"I heard the shooting and saw Matt running, and I saw Donna get shot and fall," Kavanaugh said.

After allegedly gunning down his parents, Kavanaugh said Matt casually walked away.

"He didn't turn. He didn't look at me or say anything. He just walked quickly," she said.

A massive search got underway for the 31-year-old. Police from all over Delaware County descended upon the quiet neighborhood.

A Philadelphia police helicopter and the Delaware County District Attorney's Office also joined in on the manhunt. Residents were told to shelter in place.

"We spent several hours looking for him. The firearm was eventually recovered in the house by detectives who executed the search warrant so that took away the threat of him being armed," Edmiston said.
After seven hours searching for Hox, police say they found him around 4th and Manhattan streets hiding in a dark wooded area, just a block away from the crime scene.

Action News is told Hox's mother is giving information to police as she recovers in the hospital.

"They're amazing, always a smile on their face. Hank's always sitting on the porch, having a good time," said neighbor Desirae Jeffries.

Mrs. Hox is a long-time employee at Boeing, and her husband was an avid supporter of wildlife preserves. Their son lived with them.