Local ski resorts prepare for the winter ahead 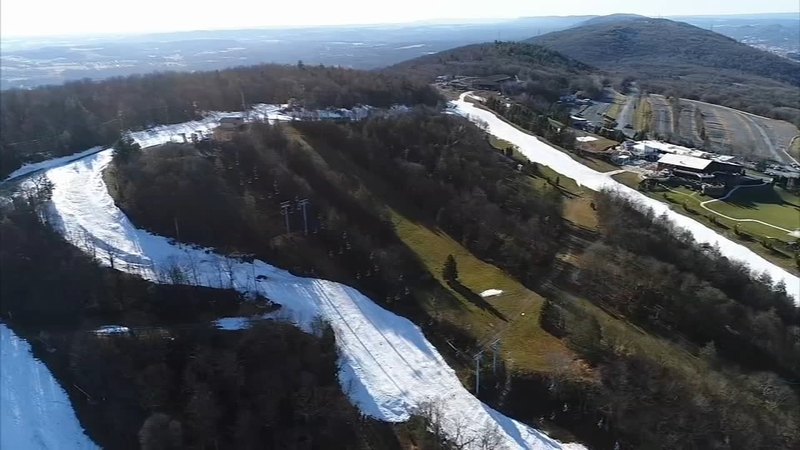 Pa. ski resorts prepare for the winter ahead

MACUNGIE, Pa. (WPVI) -- As the temperature drops, local ski resorts are crossing their fingers and hoping snow will be falling soon.

Blue Mountain was actually able to open for the weekends beginning on Black Friday. That is an unusually early start.

But warmer than average conditions since then have made it tough to maintain the snow base.

Officials say eastern Pennsylvania is due for a cold, snowy winter.

Melissa Yingling of Blue Mountain Ski Area said, "The past two winters have been really hard for us, and so we are really excited to see what feels like a normal winter, normal winter temperatures that allow us to take advantage of it and blow as much snow as we can."

So far, Blue Mountain has five trails open - weekends only for now.

The Expectation is to fully open for the season by the end of next week.
If you go 30 miles to the south to Bear Creek Mountain Resort in Macungie it's an even tougher site for skiers and snowboarders.

Bear Creek officials say it has simply been too warm here to turn on the snow guns.

"We tried to upgrade our snowmaking equipment. We have purchased cooling towers which can help reduce the water temperature. We're doing as much as we can early on to combat inconsistent cold that we have had over the last five years," said Marketing Director Jeff Zellner of Bear Creek Ski Resort.

Zellner says the past two seasons have been especially lackluster.

The standard for a good season is 100 days.

And so the holiday wish from the ski resorts this year is pretty simple.

"We are hoping for a good solid cold, a consistently cold season. And to be able to provide people with close to 100 days of skiing," Zellner said.

"We are just doing our snow dance this year, and just keeping all of our prayers and everything going for a good winter, a normal winter," Yingling added.