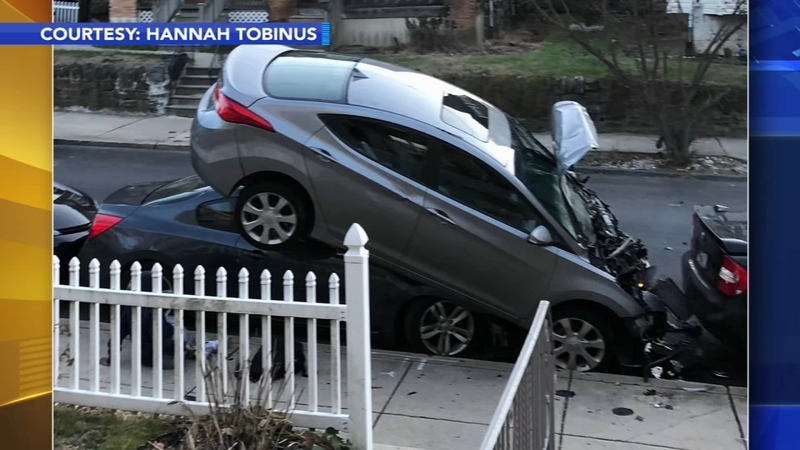 PHILADELPHIA (WPVI) -- Two young kids are hurt after a Pennsylvania State Police pursuit ended in a multi-vehicle crash in the Germantown section of Philadelphia on Tuesday evening.

Pennsylvania State Police say they attempted to initiate a traffic stop when a chase ensued on I-76. Police say one suspect threw a gun out of the vehicle during the chase, but Philadelphia officers were able to recover the weapon.

The suspect driving a silver Hyundai Entourage later crashed into a parked car along the 5200 block of Morris Street, which then struck two young kids.

#BREAKING @PAStatePolice catch driver who led them on a chace that ended on the 5200 block of Morris Street in Germantown @6abc pic.twitter.com/ssBpP3fl4w

Police say a 12-year-old boy suffered injuries to his lower leg and a 13-year-old girl possibly suffered a broken ankle during the accident. The conditions of both victims are unknown at this time.

Chopper 6 was over the wreck along Morris Street showing one vehicle in the air, sandwiched between two cars.
EMBED More News Videos

"I heard a loud boom, it sounded like an explosion," said Julia Luck.

"I just saw a guy running. He ran back there into the yard, the cops were chasing him, and about three minutes later, they brought him back out," said Jasmine Johnson.

Authorities: @PAStatePolice were in pursuit of a silver car that started on I-76 EB. Suspect crashed on 5200 block of Morris St in Germantown, and injured 2 pedestrian teens. @6abc pic.twitter.com/AGAp5LIZgC

Police say two teen pedestrians standing nearby at the scene of the crash were injured. A 12 year old has wounds to his left leg, 13 year old girl has a possible broken ankle. Suspects who led police on the pursuit are in custody @6abc pic.twitter.com/7JVRGRlHa1

State police say Renaldo McPercy Robichaw, who was driving the vehicle was arrested. James Adams, the passenger of the car has a warrant out for his arrest in Philadelphia.