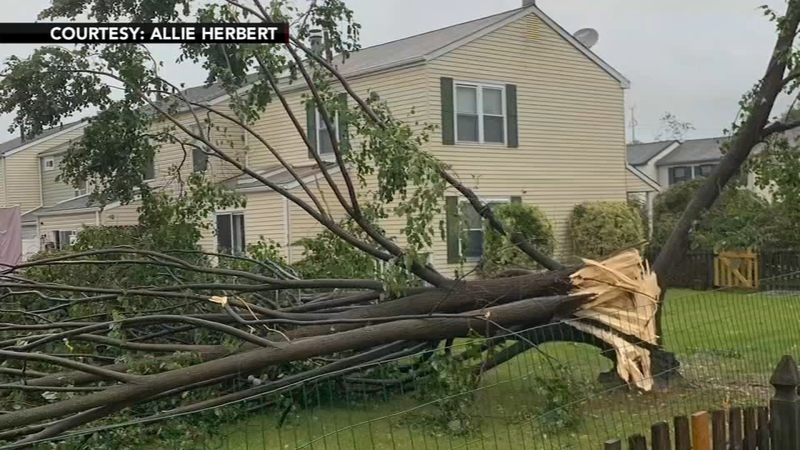 HORSHAM, Pennsylvania (WPVI) -- Video from Montgomery County, Pennsylvania showed the power of the storms that swept through the region on Wednesday evening.

Downed power lines and large trees made up most of the treacherous trek into Horsham as the remnants of Ida moved through.

Some who live in the area were left weighing the option to stay put or risk going into floodwaters to check on their homes and loved ones.

"I've been parked at the CVS. I've tried every route and it's even worse a little further down," said Munzi Mohammad.

We also got our first glimpse into the damage in nearby neighborhoods.

Herbert said she just made it home as the severe weather moved in.

"We've never seen anything like this here," she said.

A trail of destruction welcomed many drivers along Welsh Road and Limekiln Pike. With a steady flow of rain, the roads looked more like rapids as flooding remained consistent.

More destruction was apparent in nearby Maple Glen.

"I felt the house starting to shake. The rain that had been kind of steadily falling started to really increase in intensity to the point that I couldn't even hear myself think," said Mike Zajac.

Large trees and power lines were also taken down by the severe weather.

The early hum of generators could also be heard from those who lost power.

Just as the rain began so did the threat of flooding.

In Pottstown, West High Street - which is prone to flooding - proved too much for some drivers who ended up abandoning their cars

Rescuers prepared for a long night ahead

"You got to use common sense; don't jeopardize your life for your vehicle," said Joshua Groff.