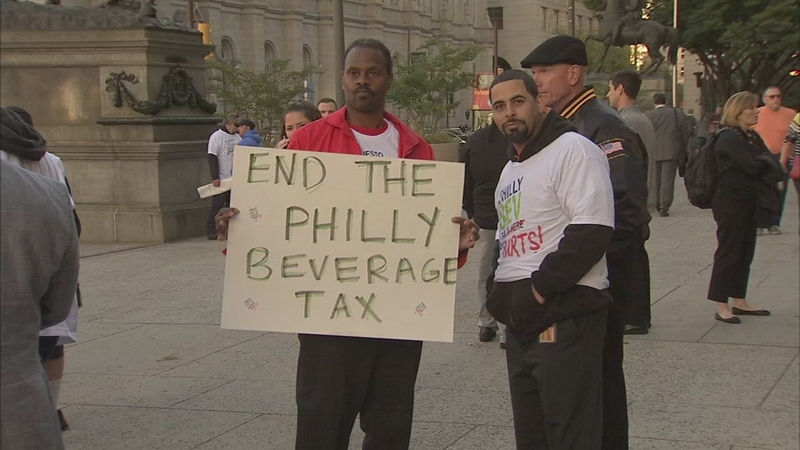 Teamsters and business owners were among the crowd calling on councilmembers to repeal the city's 1.5 cent per ounce tax on sugar sweetened and artificially sweetened drinks that went into effect in January.

"We just don't want them to think we went away; we're here for the long haul," Daniel Grace of Teamsters Local 830 said.

The protest came after elected officials in Chicago voted to roll back their beverage tax after just two months.

The speakers outside City Hall reported since January, city stores have seen a decline in beverage sales as consumers have taken their business to the suburbs, which has meant hundreds of layoffs.

"The bigger corporations can afford to stay. The Walmarts, CVS, Rite Aids, Targets, they can afford to hold on, but the small businesses are being eaten up one day at a time," Fernando Suarez of Small Business Union said.

"I see it in my suburban stores, they are up tremendously. My city stores are down tremendously. We've moved our prosperity to the suburbs," Jeff Brown of Brown's Super Stores, Inc. said.

They add that the tax discourages outside businesses from coming to Philadelphia.

Councilmember David Oh said he didn't vote for it.

"There's a lot of good things in this city. I didn't think we needed this tax because I think we have the money," Oh said.

Mayor Jim Kenney once again defended the tax Thursday, saying this revenue is crucial for universal pre-K and other city programs.

"We're not taxing air. If you're that upset, drink water. But I still drink Pepsi and Coke because it's benefiting our kids. These adults need to get out of the way and let our kids meet their potential," Kenney said.