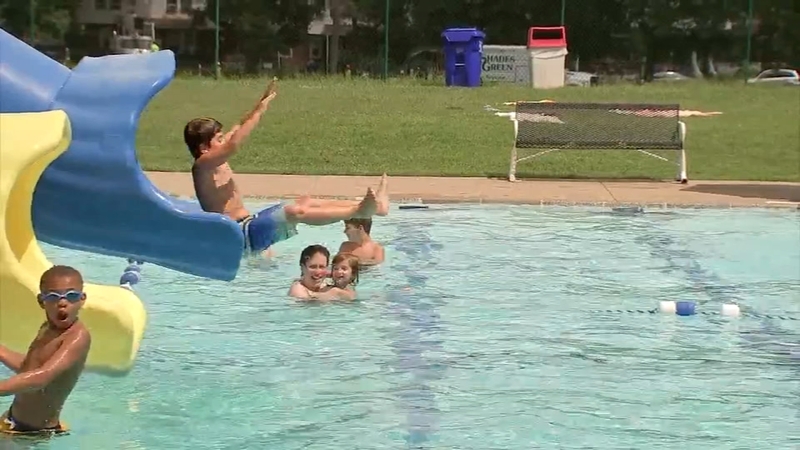 Folks in the Delaware Valley find ways to stay cool

Dozens of residents lined up outside the office to receive a fan.

Lois O'Keefe of Olney said when it's hot outside she keeps cool by keeping the lights out and shades are drawn.

"Try to keep the sun out. That's really my strategy because I only have air conditioning in the bedroom," said O'Keefe.

Parker's office obtained a hundred fans for the 11th annual giveaway which coincidentally coincided with the fifth heatwave of the season.

Despite the heat and oppressive humidity, it was business as usual for a tree crew removing a tree in Glenside.

An asphalt crew working in Wyncote said it was hot but not the worst. "I think last month was hotter than now. Sometimes we do a lot of asphalt in a day. That's bad. That's really bad," said Asphalt worker Jaime Tigre of Berwyn.

It felt close to 100 when Demere Rooker, 15, hit the football field at Bishop McDevitt High School. Hours earlier he was medically cleared from a broken ankle and immediately ran drills.

"I even told my grandma I was excited to come outside," said Rooker who said football comes first.

In Glenside, a bunch of less sweaty kids jumped into relief at the Cheltenham Township pool.
Mason Graf, 11, of Wyncote said "I like playing tag in the water with everybody. And it feels refreshing when it's hot outside."

But it's far from refreshing inside Sandy Coward's row home in West Oak Lane. The thermostat read 86 degrees at noon.

Coward is one of the dozens of senior citizens who received a free box fan. She took it home and immediately set it up in her front window.

"Oh, that feels so good. This is my buddy. My buddy," said Coward as she stood next to her new fan.

Harold Alston, who has lung disease, said the fan could be a lifesaver.