Police say two adults were shot while in the stands while students practiced on the field.
WPVI
By 6abc Digital Staff and Annie McCormick 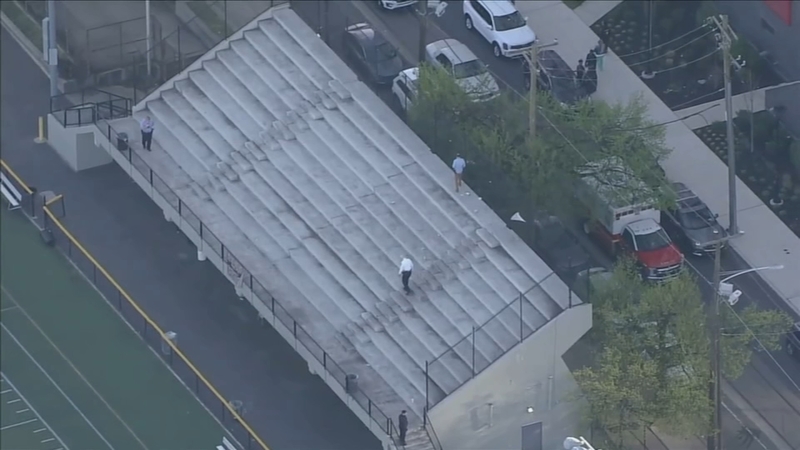 PHILADELPHIA (WPVI) -- Police are investigating a double shooting Friday at a football field in North Philadelphia near Temple University's campus.

The shooting happened around 6 p.m. at the intersection of 11th Street and Cecil B Moore Avenue.

Video obtained by Action News showed an argument in the stands above the practice field.

Police say a 35-year-old was shot once in the left hip. Another 35-year-old man was also shot in the right hand.

The video showed two men among a group of adults begin to walk away, then one turned and pointed a gun, shooting two male victims.

Both victims were taken to Temple University Hospital, and where they were listed in stable condition.

"Looks like there's six individuals in the stands, an argument ensued, one of the two males gets in an argument, and you see him pull out a gun. He starts firing at the male he was arguing with and hits one of the other males who was just sitting in the stands," said Captain John Walker, who heads the non-fatal shooting unit for the Philadelphia Police Department.

TUalert Shooting - reported at the 1100 Block of Cecil B Moore Ave. Use caution. Avoid the area. Police are responding.

The stands on the football field are owned and operated by St. Joesph's Preparatory School on Temple University's campus.

Many students who live in student housing that surrounds the field took pictures and video.

The St. Joe's Prep lacrosse team was wrapping up practice for the day, and a youth football team was on the practice field.

"People were just trying to hop the fence and get out, and cops were here within two minutes," said Malone, a sophomore.

St. Joe's Prep was supposed to hold football practice on the field Saturday but are moving to a different location.

In an email to the school, St. Joe's Prep officials said they will not be using the field for the foreseeable future.

A coach with the youth football team did not want to go on camera but feared the shooting would reflect poorly on the football team full of little kids.

After the coaches and kids got the okay from police, they continued to practice.

Police have not said if the adults involved in the argument and shooting were there for either practice.