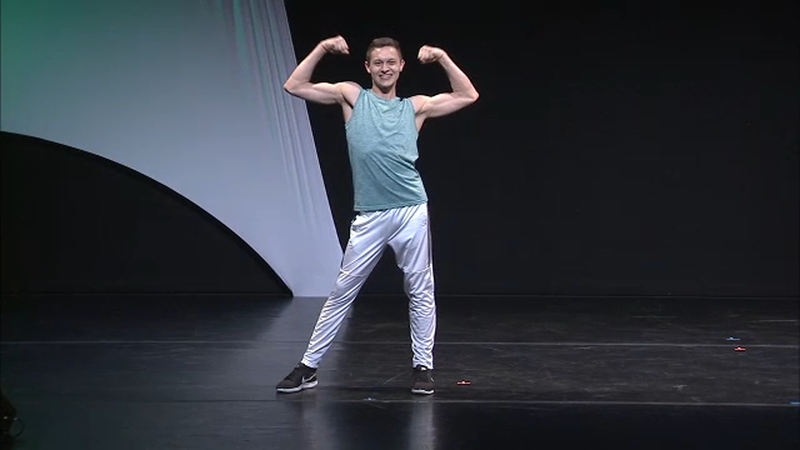 When Kyle Tanguay's number was called and his name was announced as the newest Philadelphia Eagles cheerleader, it was an unbelievable moment for him.

While the University of the Arts student said he was more excited for his roommate who was selected a few moments before him, the rest of the cheerleading squad has been rooting him on ever since Tuesday's night Eagles Cheer Final Auditions.

"When I walked out there, they were so excited. They were all super excited to get started working with the Eagles. They have all reached out to me since last night to give me a 'congratulations,' 'we're so excited for you,' 'we cannot wait to start working with you,'" Tanguay told 6abc.com on Wednesday.

Tanguay, who has been identified by the organization as the first male cheerleader on the team, did not grow up an Eagles fan - in fact, he did not grow up in Philadelphia.

It was when he moved to Philly from New Hampshire that he was bit by the Bird bug.

"I grew up in New England, which is very a super sports-oriented place, but I never really got into anything. I moved to Philly to pursue my degree at the University of the Arts. I live right in Center City.
There's something about the environment in Philadelphia and the way that they kind of view and respect their sports that got me super into it," Tanguay said.

Tanguay started watching the Eagles with his roommate's boyfriend (the roommate who also made the team) at the start of the Eagles' Super Bowl Championship season. He was captivated by the ups and down of Doug Pederson's team.

"After that season, I just knew - this team took me as someone who never really followed football and now I'm in love with the team. There's something to be said for that. Ever since then, I've followed them. I've watched every game this season. Just living in Philadelphia, being in Center City, you can't be in this community and not become very excited about the sports," Tanguay said.

Just over one year ago, Tanguay crossed paths with one of his friends who had some exciting news - she just made the Eagles Cheer team. He told her he would follow in her footsteps.

"The worst thing that would happen, they would just tell me no. I'm just going to go for it. I trained. My roommate and I worked on it together, we practiced all season. We worked on our fitness and dance training. We went for it," Tanguay said.

After people heard about his goal of becoming an Eagles cheerleader, they would tell Tanguay: 'Wow, are you really going to go for it? You think they would put a male on their team?"

A man on an NFL cheerleading squad is not a usual site, but it's one that has been seen recently.

Quinton Peron and Napolean Jinnies were the first male cheerleaders on the Los Angeles Ram squad in 2018. They also became the first to perform at the Super Bowl.

Jesse Hernandez was then selected to the Saintsations, the New Orleans Saints cheering team.

He was the only male contestant who showed up for the Eagles open call, but hopes others will be encouraged to try out in the future.

"I think it's really exciting to see this happening in the NFL. It's something that's really incredible. We've all worked really hard in our training to earn our spots on these teams. I can speak for myself with the Eagles, if there are any guys that were thinking about trying out for the Eagles Cheerleading team, I would encourage it," Tanguay said. "To hear my name call and kind of break down that barrier was really exciting for me."

Tanguay said the Eagles have been nothing but inclusive and supportive as he made it through the rounds of tryouts.

"I said this so much since the beginning of this process, every single time I showed up at the Linc or NovaCare, every single person from Barbara Zaun, who is the Director of Entertainment for the Eagles, to the workers who help check us in at events have been so kind and considerate to me. They have really been rooting for me throughout the whole entire process," Tanguay said.

His family could not make it to the finals to hear his name called, but they were all watching it on the livestream from New England. Tanguay's grandmother had to call his mom to share her happiness. And his younger brother just discovered football through Tanguay's cheerleading journey.

Tanguay said the cheerleading team already feels like a family since they've been practicing together for weeks.

And, if there was any question, he has the Eagles Fight Song on replay as he gears up for his debut.

"We actually have a playlist that we play in the apartment every time we get ready for the Eagles and it's pretty much 'Fly Eagles Fly,' all these different renditions of it over and over. So we have it memorized and we're ready for the world to hear it this season," Tanguay said.

Tanguay first started his dance training at age 10. Now at age 21, he is training to dance on the sidelines as Carson Wentz, DeSean Jackson, and Zach Ertz take the field at the Linc in the fall.

"I was walking around today, I was on the phone with the Eagles, and all my friends kept coming up to me. Someone that lives two blocks down stopped me and said 'I saw your story on 6abc, that's so incredible. Congratulations.' It's been crazy to wake up this morning and my phone has been off the hook. It's definitely a different feeling when I walk down Philadelphia today," Tanguay said.

He hopes the fear of failing doesn't discourage other men from trying out to be the next NFL cheerleader.

"It's been a great experience and I say to go for it, reach for your dreams, the sky's the limit. In the event that there's ever a no, it's just setting you up for another yes. So just keep pushing, keep training, and keep working; there's really nothing you can't get if you work for it," Tanguay said.