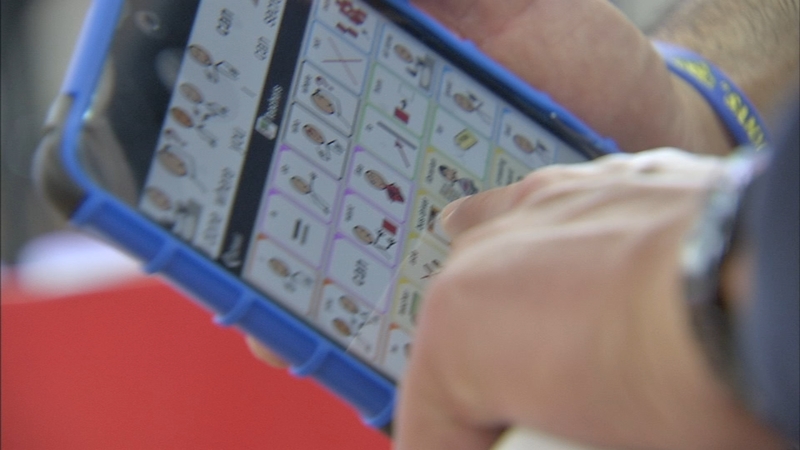 PHILADELPHIA (WPVI) -- An App designed to help children with autism learn and speak was installed on 16 iPads that were donated to Pollock Elementary School on Welsh Road.

Recently they were all turned over to the man who donated them, Philadelphia Police Officer Sammie Sanchez.

"They've been sitting for over a year now in some closet, I was told, and now they're sitting in my basement," he said.

Each year Sanchez raises money for the iPads through his Bowling- 4-iPads foundation. The iPads are then donated to a school in need, like Pollock.

"I've spoken to the teachers. I know what they have and don't have," said Sanchez. "That's the reason why they were a recipient."

But he was tipped off they weren't being used.

Sanchez said when he approached the school about it the principal said the school did not need them anymore.

According to Sanchez, he said, "You can take them and take your business elsewhere."

The reason why Sanchez started his foundation is that his son is autistic, and he has seen first-hand how this technology can help.

"It's been my story since day one when I started it," Sanchez said. "He was non-verbal and this was a piece of equipment that helped him communicate."

When asked about the donation, the district told Action News: "There were some technical issues that kept us from using the iPads right away."

But today Sanchez showed us that the iPads work, just like the dozens he's donated in the past.

Nicole Jarmin's son is a second grader with autism. He is a student at Pollock.

She's can't believe the school passed on this opportunity.

"I'm beyond disappointed. I'm livid. I'm disgusted," she said. "They can't even take part in utilizing technological devices that would help them progress that was donated. It was free."

Sanchez said he wants to work with Pollock to get the iPads back into Pollock, but if he can't he hopes to find another school in need.