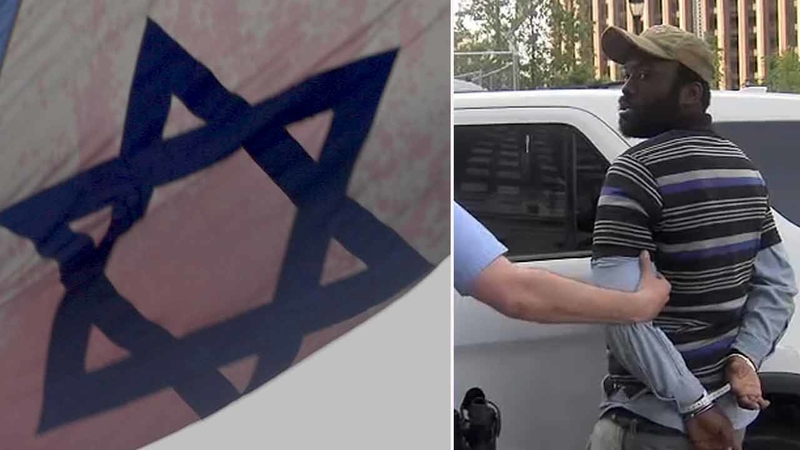 PHILADELPHIA (WPVI) -- Philadelphia Police have identified the man charged with vandalizing an Israeli flag with paint on the Ben Franklin Parkway.

Meantime, the blue and white flag of Israel that was damaged by red paint Tuesday afternoon has been removed, and a new one now flies along the Parkway.

The incident was first discovered around 4 p.m. Tuesday.

Horrified staffers from the Jewish Federation of Greater Philadelphia immediately ran out to 16th and the Parkway after a friend called to alert them.

"As we approached, we noticed a man with a paint gun shooting paint at the Israeli flag," said Spokesperson Laura Frank.

Frank took photos and called the police. When officers arrived, Frank and other witnesses watched as the man in her photos returned to the scene.

Officers found a paintball gun with red paint in the trash can below the flag.

As Philadelphia police arrested the man Action News asked him, "Did you put paint on the flag?"

Israel is one of hundreds of countries represented with flags along the Ben Franklin Parkway. At 16th Street, where the Israeli flag waves, a Holocaust memorial is currently under construction.

On Monday, as the US embassy opened in Jerusalem tensions soared during protests of the embassy more than 50 Palestinian supporters were killed.

Police don't know if the vandal responsible for defacing the Israeli flag here was acting alone or his motive.

The city is responsible for taking care of the flags along the Parkway.

There is no timeline for how long it will take to replace the defaced Israeli flag.

At this time, police are not calling this a hate crime. Instead, the suspect faces charges of institutional vandalism.