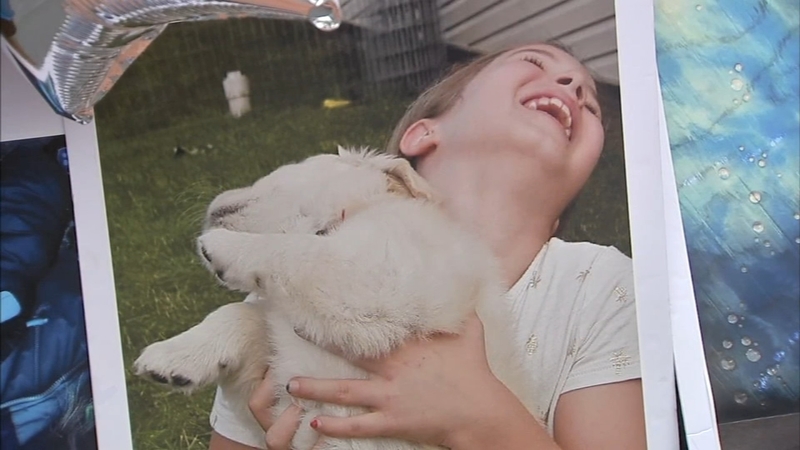 DOYLESTOWN, Pa. (WPVI) -- The heartbroken friends and family of a domestic violence victim are calling for change.

Seven-year-old Kayden Mancuso's father killed her earlier this summer in Manayunk. Now, there are calls for action from those who say this was preventable.

Monday was a somber day of remembrance - it would have been Kayden's eighth birthday.

"Justice needs to be served for her," said Juliet Budenz of Yardley. "And it's her birthday, so I figured why not celebrate her life today with the people that meant the most to her."

About two dozen of Kayden's supporters held signs outside the Bucks County Justice Center, not only remembering her bubbly personality but also calling for the removal of Judge Jeffrey Trauger.

"If he had just let her go with supervised visits she would still be here today," said Kayden's aunt, Heather Giglio.

"He shouldn't have custody of Kayden. That was a court psychiatrist who said that," said Kayden's grandmother, Jean Giglio.

Her family also hopes to bring a larger change, calling for court advocates for children in custody cases and emergency custody intervention.

Demonstrators wore teal t-shirts and many people put unicorns in their signs trying to incorporate some of Kayden's favorite things on what would've been her special day.

"Unicorns were her thing and she was about as rare and as magical as one. There will never be a little girl like her," her Aunt Heather said.

Family of murdered child push for change in Pa. law. John Rawlins reports during Action News at 5pm on September 7, 2018.

"I can't imagine the agony of Kathy, Kayden's Mother. Knowing that she should've been eight," said Laura Jennings of Holland, Pennsylvania. "I think about my daughter and blowing out candles. I can't imagine not doing that with her."

We have reached out to Judge Trauger for comment but we have not heard back.

Kayden's family says a written complaint has been filed against Judge Trauger with the Judicial Conduct Board of Pennsylvania.

Action News spoke with a representative from the Judicial Conduct Board, who says any investigation into allegations of misconduct are kept confidential.