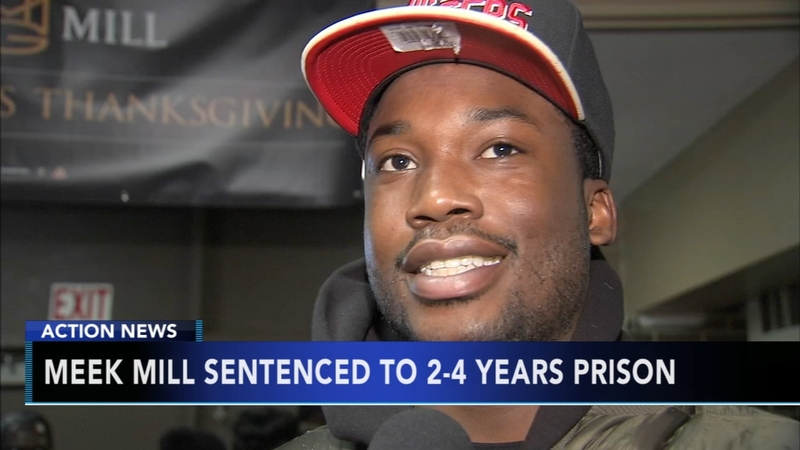 PHILADELPHIA -- Rapper Meek Mill was sentenced to two to four years in prison on probation violations Monday by a Philadelphia judge who said the musician had wasted several chances to clean up his act following a 2009 gun and drug case.

The sentence rounded out a roughly decade-long back and forth between the 30-year-old musician and Common Pleas Judge Genece Brinkley that has dogged Mill's career as he had been jailed and called to court multiple times on various infractions.

"I've been trying to help you since 2009," Brinkley said, citing a failed drug test, failure to comply with a court order restricting his travel and two other unrelated arrests. "You basically thumbed your nose at me."

The handing down of the sentence came after a prosecutor recommended that Mill not be imprisoned for the violations, saying that he has been clean since January and that he has grown as a person since his original crime. Brinkley said the prosecutor was too new to the case to understand how Mill just "does what he wants."

Mill owned up to the violations in his only statement during the hearing and said that jailing him would likely end his musical career. He said that he has battled addiction to the prescription painkiller Percocet and that he has only tried to escape a life of crime.

"I may have made a mistake but I never had the intention of disrespecting you," he said.

His lawyer, Brian McMonagle, restated the prosecutor's recommendation of no prison sentence back to the judge as Mill emptied his pockets and removed jewelry from his wrists. With a court officer looming behind him, Mill turned his head and looked backed in the direction of his mother before standing up and being led out of the room by the officer.

McMonagle vowed to appeal the decision as more than a dozen friends and family members stormed out of the courtroom.