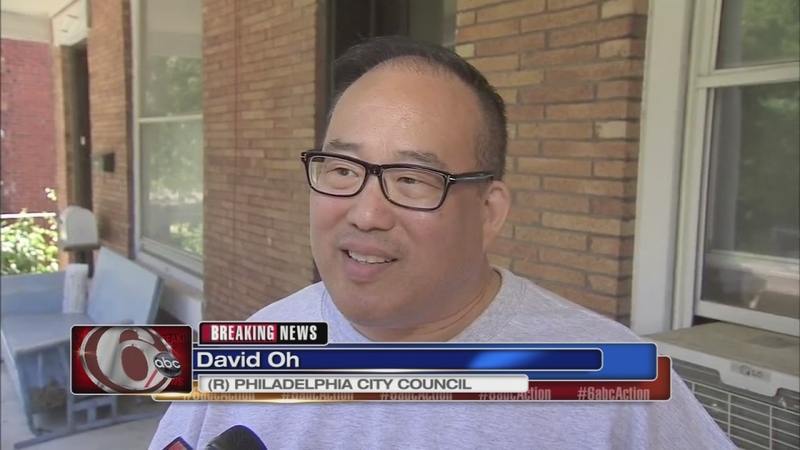 PHILADELPHIA (WPVI) -- Philadelphia City Councilman David Oh talked about the moment he was stabbed outside his home during an attempted robbery on Wednesday night.

Action News was with Oh at his home in Southwest Philadelphia after his release from the hospital on Thursday afternoon.

He described the attack, and the moment several men recorded video on their cell phones... but did not help him.

Oh said it began as he was unloading his car after getting home from work in the 5800 block of Thomas Avenue. That's when a man approached him on the street.

He said he didn't think much of it, thinking perhaps the man was the friend of a neighbor.

But then the man started making demands, and things escalated from there.

"He mumbled something to me, and I said 'what?'" Oh said. "Then he said 'The keys! The keys to your car! Your car!' And I'm thinking to myself, 'Was there an accident? Does he need my car?'"

"Then he punched me in the lower rib, which I happen to know what that is. And I said 'Did you just stab me?' And he had," Oh continued.

Oh said he looked down and saw the man used a shiv - a makeshift knife - to stab him. Oh says he tried to back away, but the man continued trying to slash him. Oh said he put his hands up and his arm was slashed.

Then, Oh says, a car pulled up and several men got out with smart phones and started to record video of the incident.

"I saw them recording it, jeering, shouting out," he said. Oh said he believes the men thought they had stumbled upon a dispute or street fight.

"But I think when they saw the blood - because there was a lot of blood - I think they got the idea, like, 'we're in the middle of something else,' so they took off," said Oh.

The assailant then took off, and help arrived soon after. Oh was taken to the hospital in critical condition, but was released about 18 hours later.

Watch video from Action Cam from the 5800 block of Thomas Avenue in Southwest Philadelphia, where Philadelphia City Councilman David Oh was stabbed during a robbery attempt.

Oh is hopeful his attacker is caught soon.

"My concern is this: This is a guy who stabs first, then takes. I think that's a very dangerous kind of person."

Police say the robbery attempt was likely a crime of opportunity. They believe the suspect probably did not know the person he attacked is a city council member.

"We believe it was 100% random. There was no mention of who he was or asking who he was. It was just an attack to get the car and the items it may have had, that was thwarted by the councilman's actions," said Lt. John Walker.

Authorities are asking the men who recorded the video to come forward to help identify Oh's attacker.

Police say they have collected four surveillance videos from the councilman's neighborhood and are screening them in an effort to identify the suspect.

City Council President Darrell Clarke visited Oh in the hospital overnight, then addressed the media on Thursday morning. He renewed his concerns about the amount of violence in Philadelphia.

"It's not okay. His family has suffered a tragedy, and they will never forget about the fact they saw their father and husband bleeding from a random level of violence," Clarke said.

Oh earlier released a photograph from his hospital stay. It shows him sitting up and smiling, his family at his side, after he underwent emergency surgery at Penn Presbyterian Medical Center.

Councilman David Oh, sitting up and smiling with his wife and two kids after emergency surgery overnight. pic.twitter.com/G9ptyMi82G

Oh is a councilman-at-large, and has lived in the same home since the 1960's. He was first elected to Philadelphia City Council in 2011, then re-elected in 2015.

Philadelphia Mayor Jim Kenney, who was in Iceland when the incident happened, issued the following statement:

"We are all praying for Councilman Oh's quick recovery and thinking of his family during this incredibly difficult time. Whenever violence happens on our streets it is a terrible tragedy. When it happens near our homes, where we are supposed to feel safe, it is all the more devastating. Anyone with information regarding this crime is urged to call 911."

A fellow council member spoke of her admiration for Oh on Thursday.

"He does his homework on his issues he's focused on, issues he wants to fight for, doesn't give in," said Councilwoman Jannie Blackwell. "It's ok if we all disagree, but he will fight his point. I like that about him, I like when people are not afraid to stand up for what they believe."