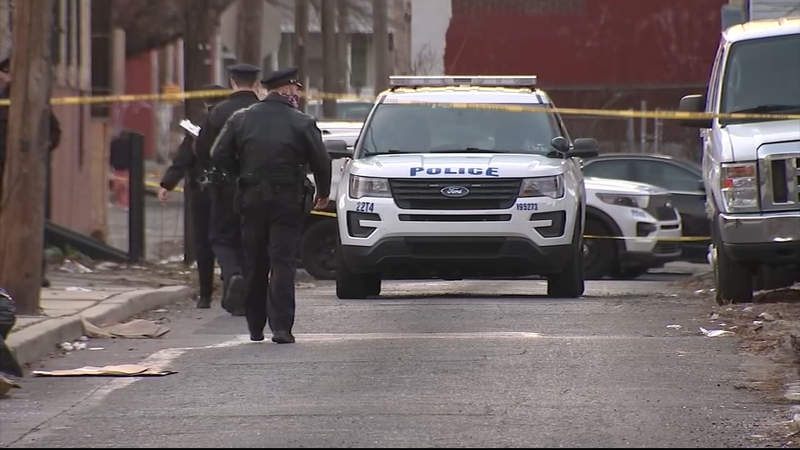 PHILADELPHIA (WPVI) -- Twenty-one days into the new year and already Philadelphia is ahead of last year's record pace in homicides and shootings.

Homicides are currently up 10% and shootings are up a whopping 37%. Police say 13 of the victims are children.

On Wednesday night, police say at least a dozen people were shot, three of them were killed, in nine separate shootings.

An Uber Eats driver was among those shot on Wednesday afternoon on the 4700 block of Chestnut Street around 4 p.m.

Police say the driver was on a delivery with a male associate when they got caught up in a road rage incident with the driver of a white Dodge Ram pick-up truck. The Dodge driver then got out and fired 11 shots into the victim's car, police said.

SEE ALSO: At least a dozen shot, 3 killed, in shootings within a few hours across Philadelphia
EMBED More News Videos

At least a dozen people were shot, three of them were killed, in nine separate shootings that occurred within hours of each other in Philadelphia.

The Uber driver, a 20-year-old woman, was struck in the chest but she is expected to survive.

Around 3:30 p.m. police responded to a shooting between two tow truck drivers at 41st Street and Lancaster Avenue.

"A gun is pulled, shots are fired, and it just seems that we're seeing a lot of this in this division," said Captain Matt Gillespie, the commander of the 18th District.

The gunfire continued on Thursday night. Officers were called to the 1300 block of West Seltzer Street for a report of a shooting.

Police say a man was chasing another man while firing shots at him. One of the bullets hit a 62-year-old man who was sitting on the front steps of his house with his sister drinking a beer.

"We believe he was struck by stray gunfire. We do not believe the 62-year-old victim was not the intended target," said Philadelphia Police Chief Inspector Scott Small.

Fortunately, the bullet struck him in the foot. He is expected to survive.

Around 4:30 p.m. in the 3000 block of Arizona Street, a 25-year-old man had just walked out of his house when a man on foot fired four shots at him. He is currently listed in critical condition.

"Just feet away from his back door, that's when he got shot in the head two times," said Small.

A Philadelphia business owner said a lot of the problems in his neighborhood stem from a lack of jobs.

"They don't have no choice but to sell drugs, rob, steal," he said.

He says people need to feel like they matter and should start demanding job-creating policies.

"Look around you, everything is boarded up. It's depressing," he said.