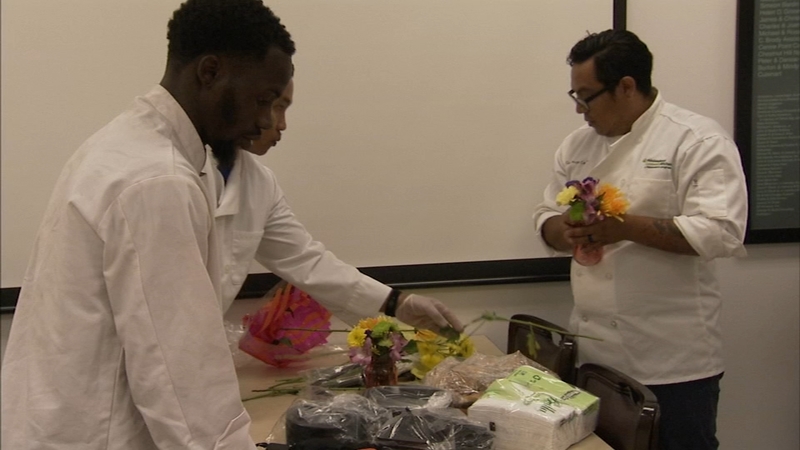 It was on that principle that Philabundance Community Kitchen or PCK was founded.

The Philabundance Community Kitchen has been around for nearly 2 decades but this is the program's new catering arm.

Called PCKatering, it gives the students a chance to put their 14 weeks of culinary training to the real world test.

"Being able to present a spread like that I mean you see it, it's awesome, it's colorful, its enticing, it's appetizing," said PCK student Elizabeth Styles Brown.

On this day, the students were serving staff at Philabundance Headquarters in South Philadelphia.

"I have curry chicken, which is absolutely awesome," said Philabundance employee Todd Silverstein.

The money the catering program brings in is then plowed right back into the Philabundance culinary training program, which teaches the students how to cook professionally but also how to live successful lives.

"It has been transformational," said Deputy Director, Workforce and Community Development for PCK Hunger Candance Matthews-Bass. "A lot of our programs are very, very good at meeting people where they are, and this program actually takes people from where they are to where they want to be."

"I just wanted to do better for myself," said Sealy.

He was searching for a job that would lift his family out of poverty when he saw a flyer for PCK.

"My cooking game is on point. It's always been on point, you know, but I've learned some more technical things," he said. "I became more confident in a professional kitchen."

Bandjar Jalosjos entered the program with no cooking skills and with the hope it will give him a second chance of life after a significant time behind bars.

"For a long time I was in, I didn't have any drive. I had no direction, I had no goals and pretty much I was not contributing to society," he said. "And now they teach me a lot about myself and how to be a man and just owning up to your responsibilities."

PCK will soon be moving into a new building that will enable the program to grow even more.