Phillies bullpen melts down in 8th, Reds rally for 6-2 win 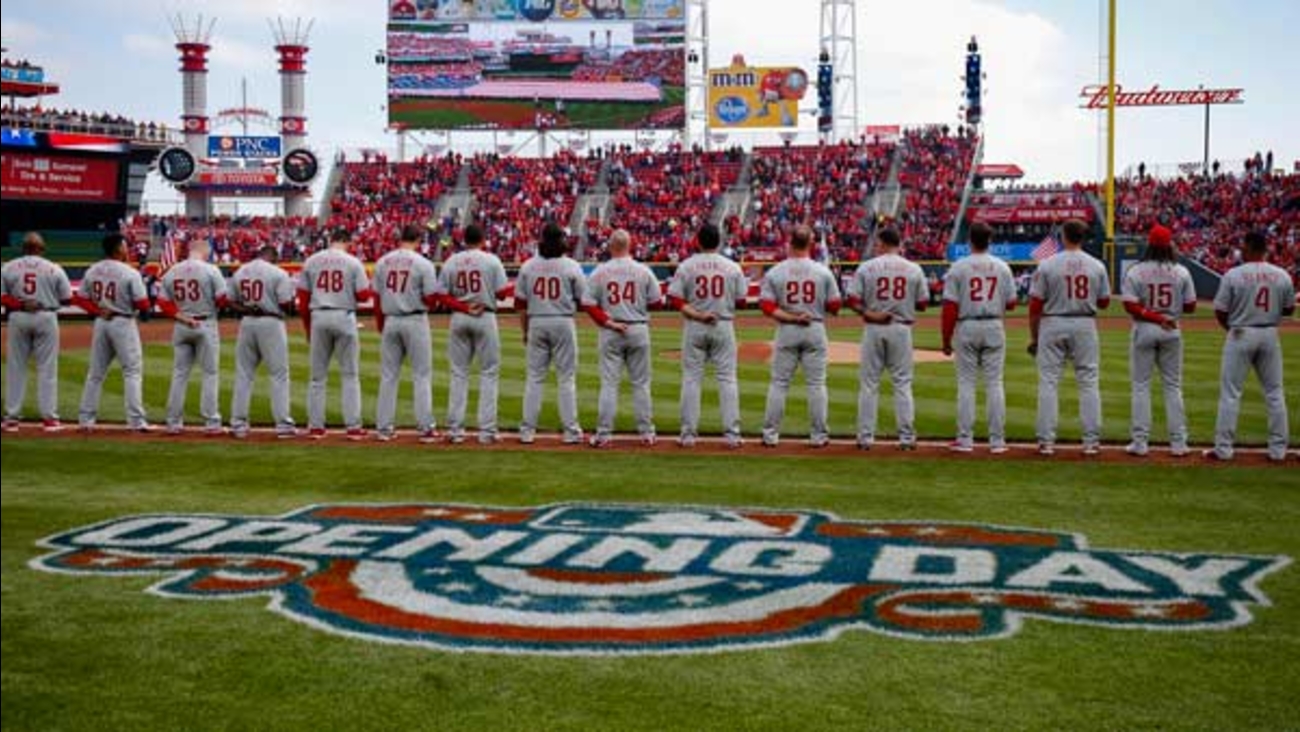 The Philadelphia Phillies line up before an opening day baseball game against the Cincinnati Reds, Monday, April 4, 2016, in Cincinnati. (AP Photo/Gary Landers)

CINCINNATI -- The Phillies' bullpen was their biggest concern heading into the season. It melted down in the first game.

Zack Cozart drove in the tying run with a sacrifice fly in the eighth inning and Joey Votto followed with a bases-loaded single, sending the Cincinnati Reds to a 6-2 victory on Monday in an opener matching the majors' two worst teams from last season.

For the Phillies, it looked and felt so familiar.

The Reds scored five times in the eighth against Philadelphia's work-in-progress bullpen. Jay Bruce completed the rally with a two-run double in front of 43,683 fans, the largest regular-season crowd in Great American Ball Park history.

Both teams plunged into a major rebuilding job last season, when the Phillies had the worst record in the majors at 63-99 and the Reds were only one game better. Cincinnati's late rally ruined Philadelphia's hopes of a pleasant start to the new season.

David Hernandez (0-1) came on for the bottom of the eighth trying to hold a 2-1 lead, but failed to retire a batter, giving up Scott Schebler's pinch-hit double and a pair of walks. Cozart's fly ball to right tied it.

"I felt I was loose and ready," Hernandez said. "I just couldn't throw the ball anywhere near the plate. It's a waste of a good start."

Votto fanned his first three at-bats against starter Jeremy Hellickson, but singled off left-hander James Russell for a 4-2 lead. Bruce doubled off Hector Neris during the nine-batter rally.

Ross Ohlendorf (1-0) got the win for fanning the only batter he faced.

Freddy Galvis hit a two-run homer, and Hellickson allowed only three hits - all by Cozart - in six innings to keep the Phillies ahead until the eighth. Hellickson became only the ninth pitcher to fan Votto three times in a game, according to STATS.

"You don't give him the same pitch twice," Hellickson said. "You mix it up as best you can."

Mackanin had Ryan Howard and Carlos Ruiz in the starting lineup, in part because of sentimental reasons. Ruiz is expected to back up Cameron Rupp at catcher. Howard's error let in Cincinnati's first run - he dropped Galvis' throw from shortstop in the first inning.

The Phillies and Reds have split their eight season openers. The Phillies haven't beaten the Reds on opening day since April 9, 1963, at Connie Mack Stadium. Their last season-opening win in Cincinnati occurred on April 9, 1962, at Crosley Field.

"I'm still trying to figure out that caper," Reds manager Bryan Price said. "I knew he was at the ballpark, just not where he was at that time."

The Reds decided to call up right-hander Robert Stephenson - their top pick in the June 2011 amateur draft - to start the final game of the series on Thursday. He'll be the seventh Reds pitcher to make his major league debut in the last two seasons.

Reds: C Devin Mesoraco went 0 for 4 in his return from hip surgery. He also got hit on the mask by Maikel Franco's bat on a swing but stayed in the game.

Phillies: RHP Aaron Nola starts the second game of the series after a day off on Tuesday. Nola, the Phillies' top pick in the 2014 draft, made 13 starts for Philadelphia last season and went 6-2 with a 3.59 ERA.

Reds: LHP Brandon Finnegan makes his fifth start for the Reds, who got him from Kansas City in the Johnny Cueto trade last July. He was 2-2 with a 4.18 ERA with Cincinnati.