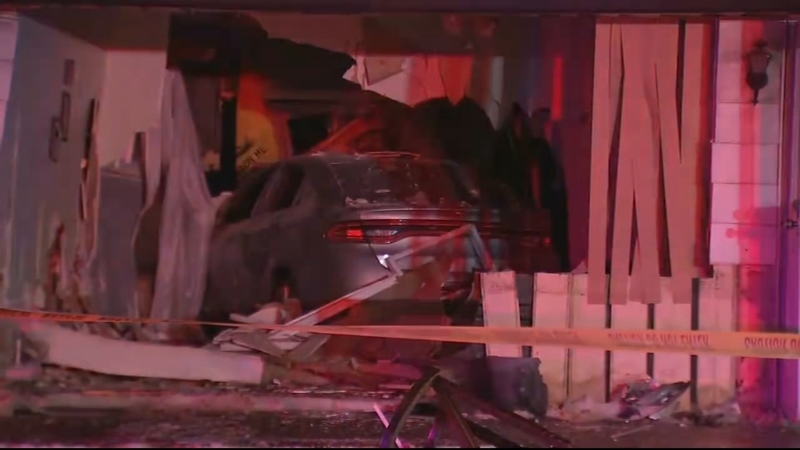 PHILADELPHIA (WPVI) -- An off-duty Philadelphia police officer is accused of driving under the influence when he allegedly crashed his car into a home, injuring two people inside on Saturday night.

Action News spoke to a neighbor who says he helped a man dig through the rubble to find his wife who was pinned under the car.

Moments after a silver Dodge Dart crashed through the home in the 2800 block of Comly Road around 8:20 p.m., Martin Brown said he quickly looked outside. He lives two doors down from the home.

"I was in the kitchen and I heard what sounded like an explosion," said Brown.

Brown said a bystander who had pulled over, stayed with the driver while he tried to help the couple inside.

"He was screaming that his wife was stuck underneath of the car and that he needed to move the car in order to get to her," said Brown.

The two men dug through the rubble to find the 53-year-old woman.

"He dropped to his knees. He was petting her hair, telling her he was there and, 'It's going to be alright,'" recalled Brown.

Shortly after, he says emergency crews arrived and freed the woman, taking her to the hospital in critical condition.

One of the couple's dogs was also killed in the crash.

Philadelphia police say the driver has been identified as Gregory Campbell, 27, an off-duty police officer with the 14th District.

Police say he is charged with driving under the influence, aggravated assault and related crimes. He was taken to Jefferson Torresdale for a laceration to the head.

"The consequences of choosing to drive while under the influence are enormous, and all too often, life-changing," said Police Commissioner Danielle Outlaw. "A family should always feel safe in their home, and yet the actions of this individual shattered that reality. The fact that the offender, in this case, is a Philadelphia Police Officer is appalling. Police Officers must be held to a higher standard - even while off-duty - and I assure the victims and the public that a complete and thorough investigation will take place. My prayers remain with this family."

FOP President John McNesby said he is also sending his thoughts and prayers to the victim's family.

"Our thoughts and prayers go out to the victim's family and hope those injured will make a full recovery," he said. "This is an unfortunate incident and we continue to monitor the investigation."

Court paperwork shows Campbell was arraigned Sunday evening and his bail was set at 10% of $40,000.