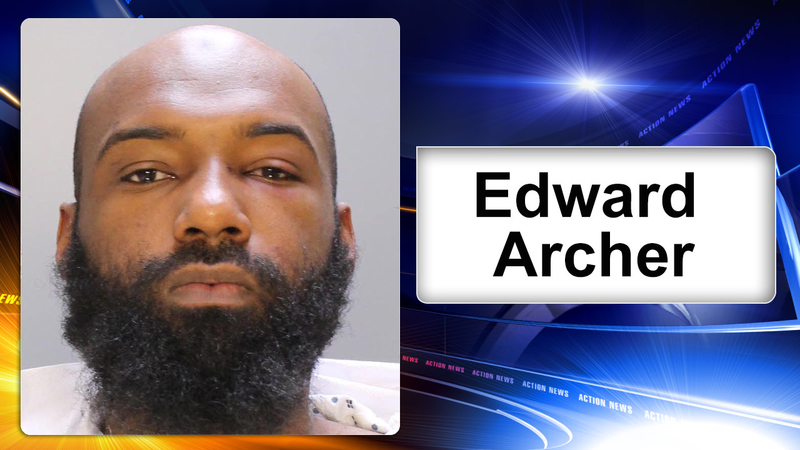 WEST PHILADELPHIA (WPVI) -- Officials said Edward Archer, the suspect in custody, was charged with attempted murder and held without bail Saturday in connection with the shooting of a Philadelphia police officer.

Archer, 30, of Yeadon is facing eight charges including attempted murder, aggravated assault and assault of a law enforcement officer in the shooting of Officer Jesse Hartnett.

According to police, Archer confessed to the crime, saying he did it "in the name of Islam."

Commissioner Richard Ross provided the update during a news conference on Friday afternoon. He said there was no indication from Archer that he was involved in a conspiracy.

Archer allegedly told authorities he targeted an officer because police defend laws that are contrary to the Quran.

Archer pledged his allegiance to ISIS, officials said. Ross called the shooting "an attempted assassination of a police officer."

Two law enforcement sources tell ABC News Archer took two recent trips to the Middle East - Saudi Arabia in 2011 for Hajj and Egypt in 2012. However, he was not on a terror watch list.

Ross went on to say Archer "stopped short of implicating anyone else in the attack," adding Archer was "very evasive."

Officials also said the gun used in the crime, a 9mm Glock 17, had been stolen from a police officer's home in 2013, but it's not clear how it ended up in Archer's hand. That officer had been disciplined, Ross said.

The shooting happened around 11:40 p.m. on Thursday.

Surveillance images show a man, identified as Archer, approaching the driver's side window of Hartnett's vehicle.

Images also show the suspect pointing a gun at Hartnett's vehicle, while another shows what appears to be the muzzle flash as he fires. Another image shows the gunman with his arm in the vehicle.

Ross said there was no advance warning to the officer and the suspect "just started firing."

The suspect fired a total of 13 shots, three of which hit Hartnett in the arm, police said.

Hear the police radio call that went out after an officer was ambushed and shot in West Philadelphia.

Despite being seriously wounded, Hartnett got out of his car, chased the suspect and returned fire, wounding his attacker in the buttocks, police said. Other officers chased Archer and apprehended him.

Ross called it "absolutely amazing" that Harnett survived. "It's nothing short of miraculous and we're thankful for that," he said.

"I just have to tell you, when you look at the video - we have video that captured all of this - it's one of the scariest things I've ever seen," said Ross. "This guy tried to execute the police officer. It's amazing he's alive."

The moments immediately following the shooting were also captured in a dramatic recording of police radio calls obtained by Action News overnight.

Hartnett, 33, is a 5-year veteran of the force. He suffered extensive injuries to his arm, but authorities said he was awake and alert prior to surgery.

The officer's father, Robert Hartnett, got to the hospital right away. The two were able to speak after the officer woke up following surgery.

"I love him and very proud of him. He's an excellent person," Robert Hartnett said.

Hartnett grew up in East Lansdowne with three siblings. He went from the Coast Guard to the police academy.

"His spirits are positive," Ross said. "Now that I see he's waking up. It will be a tough road. But he's a tough guy."

Archer had been arrested previously on charges that include aggravated assault and firearms violations.

"I knew he was Muslim. I knew that he spent time in Egypt before he came back to the United States. He was in Egypt all through 2012," said attorney Doug Dolfman.

Dolfman represented Archer on previous weapons charges in 2013 after he returned from Egypt.

"I don't think he had anything to do with ISIS or the Islamic state or anything like that," said Dolfman. "I think this was an impulsive act by somebody who wanted to make a mark for himself."

The FBI is investigating any connections to the terror group as they pour through evidence collected Friday from Archer's mother's home in Yeadon.

Archer's mother, who declined to speak on camera, tells Action News she is praying for Officer Hartnett.

She says the man seen in those images firing at a police cruiser simply isn't the son she knows.

Mayor Jim Kenney, who said the incident has nothing to do with Islam, spoke to reporters about Officer Hartnett at a mural painting event at the Al-Aqsa Islamic Society in Kensington.

Kenney said his visit, planned before the shooting, is intended to show his support for the Muslim community who he says shouldn't have to answer for every criminal who invokes Islam.