The shooting happened on the 5500 block of Rising Sun Avenue near Banana's Bar & Lounge.
WPVI
By 6abc Digital Staff 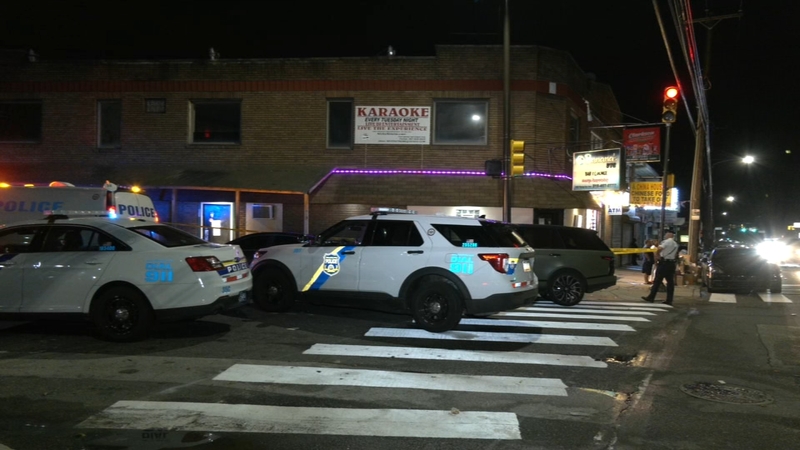 Suspect in Philly quintuple shooting, carjacking remains on the loose

PHILADELPHIA (WPVI) -- A suspect in a quintuple shooting and a carjacking in the Olney section of Philadelphia remains on the loose.

Police say at least five people were playing a dice game outside Banana's Bar & Lounge along the 5500 block of Rising Sun Avenue when a gunman opened fire around 10 p.m. Wednesday.

One man was killed and four others were injured.

Police say the shooter then carjacked a woman and pulled her out of her vehicle before speeding down Rising Sun Avenue.

The gunman only made it a few blocks before crashing into a parked vehicle in the 5300 block of Water Street.

Firefighters arrived at John's Roast Pork on Snyder Avenue early Tuesday morning to find a pile of newspapers on fire.

Police say the suspect then ran from that crash scene and has not been caught.

The man killed in the shooting has not been identified.

A 27-year-old man is in critical condition after being shot in the arm and leg.

Another victim, a 46-year-old man, showed up at Einstein Medical Center around 3 a.m. suffering from two gunshot wounds to the leg.

The gun violence epidemic continued to rage in the city with a triple shooting in North Philadelphia.

Three people were wounded in North Philadelphia, one critically.

It happened just after 4 a.m. Thursday on the 2200 block of West Seybert Street.

Police say a male shooting victim is in critical condition. Two other male victims are listed as stable.

There is no word yet on what sparked the shooting.