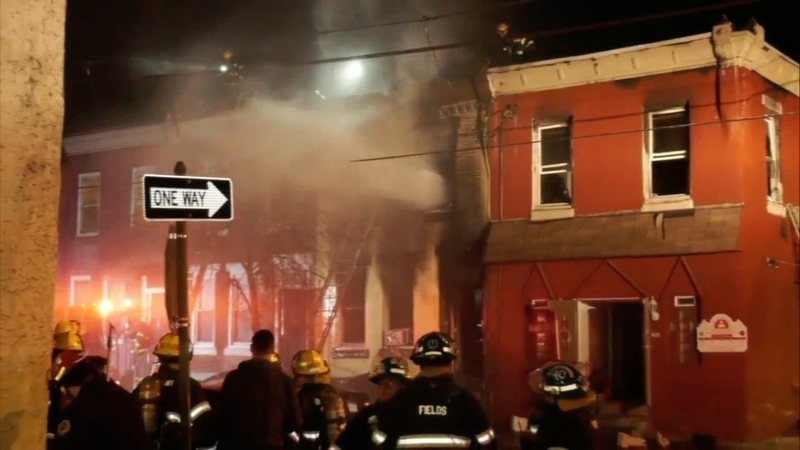 POINT BREEZE (WPVI) -- Two people are dead, and the cause of the fire remains under investigation as police continue to hold the scene Saturday night.

Just before 5 a.m. Saturday, flames broke out inside a home in the 1400 block of South 23rd Street.

Firefighters arrived to unconfirmed reports of people trapped inside.

As crews searched, you could hear devastated onlookers crying from the street.

Deputy Fire Commissioner Anthony Sneidar said, "We began a primary search for victims and unfortunately we were able to locate two victims on the second floor of the initial fire dwelling."

The two victims, a man, and a woman did not make it out alive.

The fire raged beginning on the first floor, quickly spreading to the second floor trapping the victims.

Firefighters feared the building would collapse.

"Once they started the interior firefight the second floor also took off so we had heavy smoke and fire conditions throughout at the same time. The fire began to spread horizontally to the left and right of the initial fire dwelling," said Deputy Fire Commissioner Sneidar.

In total, five buildings were affected, including a newly renovated church.

Crime scene tape and a police car remained at the scene late in the day.

L&I worked with federal and local investigators to shore up the house where the fire originated, so they could investigate.