"It's one of the largest mains that the City of Philadelphia has," a fire official says.
WPVI
By 6abc Digital Staff, Annie McCormick and Bob Brooks 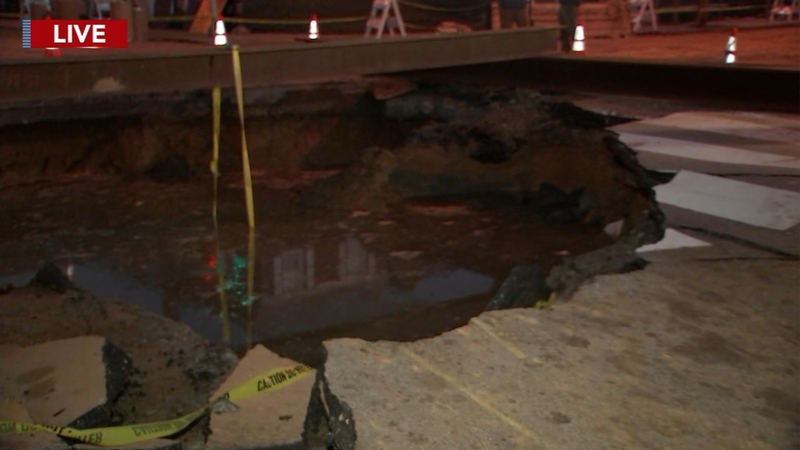 The Philadelphia Fire Department received a call around 6:42 a.m. of a transmission water main break at the intersection of 56th Street and Springfield Avenue.

Transmission mains are used to carry water to different parts of the city. This main was installed in 1921.

24 hours ago, water was gushing through Kingsessing. A look this AM: pic.twitter.com/imaus1pCx4

"It's one of the largest mains that the City of Philadelphia has," Philadelphia Fire Deputy Chief Kamau Bright said.

Bright said as firefighters arrived on the scene, they rescued one resident from a basement apartment of a corner property.

"In total, five residents were removed and sheltered, and three properties were affected immediately," Bright said.

SEPTA buses were brought in to provide shelter to those who needed to evacuate. All other residents in the area were able to remain and shelter in their homes.

The Action Cam and Chopper 6 are on the scene of a massive water main break in Philadelphia.

The view from Chopper 6 showed the city neighborhood transformed into a temporary river. Many of the cars on the block were trapped as crews worked to assess the situation.

The water main break also sent water gushing into nearby basements on the block.

Bright said when water gets into basements it can create issues with gas service so Philadelphia Gas Works crews responded to the neighborhood, as well.

Chopper 6 over a massive water main break in Philadelphia.

Officials said the immediate priority was to help anyone who was dealing with flooding. Residents can contact PWD at (215) 685-6300.

"If there's anyone who has significant amounts of water in their basement that needs to be pumped out, we reach those people first," said Brian Rademaekers with the Philadelphia Water Department.

Crews from the Philadelphia Water Department are working on repairs after a massive water main break.

Resident Rick Burns, who has lived on the block for six years, was on his way to check his basement.

"I've never seen that much water on the block since I've been here," Burns told Action News.

Darryl Simmons said he wasn't surprised by what happened.

Over the last 15 years, Philadelphia has averaged 776 breaks annually. As of Wednesday, an estimated 247 potential main breaks have been investigated or repaired since January 1, 2022.

More main breaks occur from December to February on average than in warmer months.

Firefighters could be seen going door-to-door to help anyone who needs to get to another location.

The cause of the water main break is still under investigation.

Drivers in the immediate area should expect delays.

More than a dozen schools within the School District of Philadelphia switched to virtual learning Wednesday due to no running water in their buildings.

A massive water main broke in the area of S. 56th Street and Springfield Avenue.