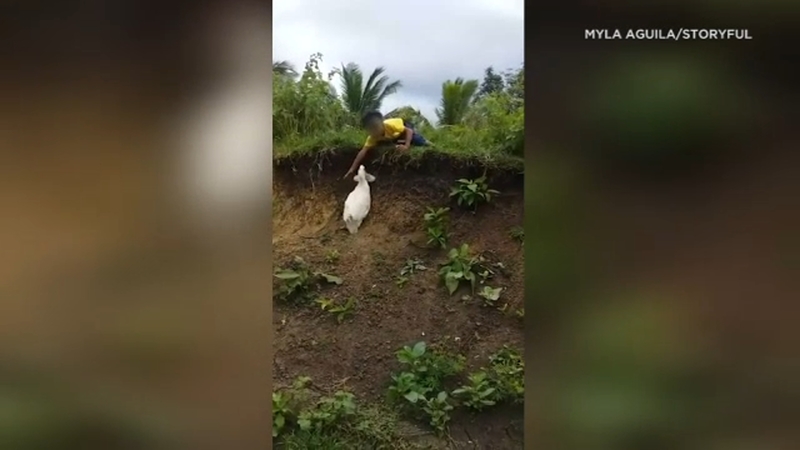 PHILIPPINES -- A woman captured a sweet moment between a duck and a little boy who lost his sandal in the Philippines.

Myla Aguila said she was at the right place at the right time earlier this month. Her video, which garnered plenty of attention on Facebook, shows a little boy, who appeared to have dropped his sandal off an embankment.

He was unable to get it back on his own. However, a duck waddling around at the bottom of the embankment somehow knew to pick up the shoe. The duck then attempted to bring it back up the little hillside to the boy.

After several tries, the bird was finally able to reach the boy and "deliver" the sandal back to the child.

"I asked around, and people told me that the duck is not owned by the boy. But they come from that same small village, so they must be friends," Aguila told local media.
Report a correction or typo
Related topics:
pets & animalsfunny videoduckanimal
Copyright © 2022 WPVI-TV. All Rights Reserved.
TOP STORIES
1 dead, 4 injured after driver crashes into utility pole in Montco
AccuWeather: Clipper system to bring snow showers to parts of region
Fire on roof sends smoke billowing over Center City
5 tax changes that can boost your refund this year
US draws down Ukraine embassy presence as war fears mount
Fauci optimistic omicron will peak in February
Gamers raise thousands for CHOP during 24-hour marathon
Show More
Goats help recycle Christmas trees in Philadelphia
Former CHOP patient becomes nurse at new King of Prussia hospital
Woman says someone followed her in Center City using Apple AirTag
Family demands justice after 23-year-old woman found dead after date
How to order your free COVID tests from the government
More TOP STORIES News