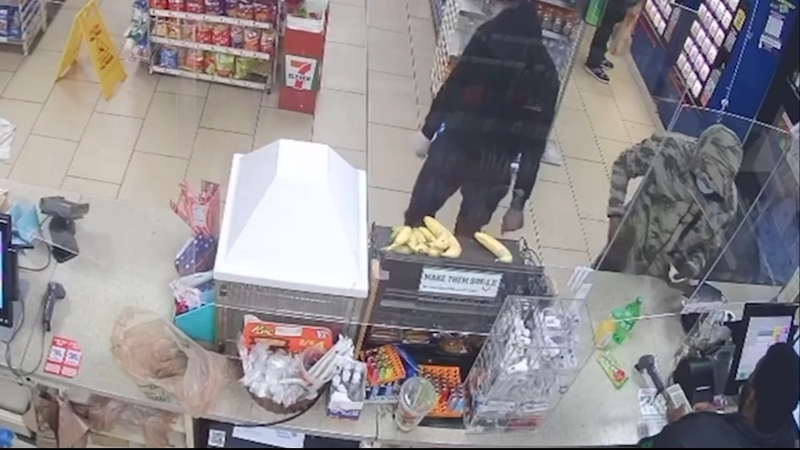 PHILADELPHIA (WPVI) -- A carjacking and two armed robberies are the latest in a pattern of criminal activity that is leaving South Philadelphia business owners and residents terrified.

Those who live around 23rd Street and Passyunk Avenue said there has been a rash of crimes recently.

Resident Vander Knight said, "I even get in the house when it's dark, I don't even want to be out"

So it left no one surprise when community members heard from police of the latest incident.

Police said two men carjacked a driver and drove the stolen vehicle to the Dollar Tree at the 2000 block of West Oregon Avenue to stage a robbery.

Minutes later, they drove less than a mile to a 7-Eleven on the 2300 block of West Passyunk Avenue, where they posed as customers.

"They came in a car which I later understood that it was hijacked," said Vincent Emmanuel of the Delaware Valley Franchise Owners Association.

Surveillance video from the convenience store shows one man walking up to the counter to pay for something.

When he gets his change, he pulls a gun, lays it on the counter and announces a hold-up.

All this unfolds as normal business continues in the background.

"Those employees at the store are very trained for that kind of dealings," said Emmanuel.

Minutes later, the second suspect comes to the counter and lays his gun on the counter, apparently to hurry things up.

Meanwhile, a few feet away, another clerk continues to check out a customer, apparently oblivious to what was going on next to them.

Moments later, the two men grab the money and flee the scene.

"One of the biggest worries for a retailer is whether your employees get hurt," said Emmanuel.

Some residents have their own theories of what is fueling all this crime.

"I think it's all because nobody has any money and everybody's robbing people and everything," said Vander Knight. "It's gotten so bad."

And some feel COVID mitigation efforts may also be contributing.

"When you have people walking around with masks on, they feel like they can do anything they want cause they can get away with it," said Lucas.

Emmanuel added, "I don't know who's watching this and who's paying attention, but unless something is done, with the COVID and all these firearm issues and robberies, these stores will go out of business."

Police Public Affairs confirmed that multiple robberies did occur Monday night in the area. Some by one male, others by two or more.