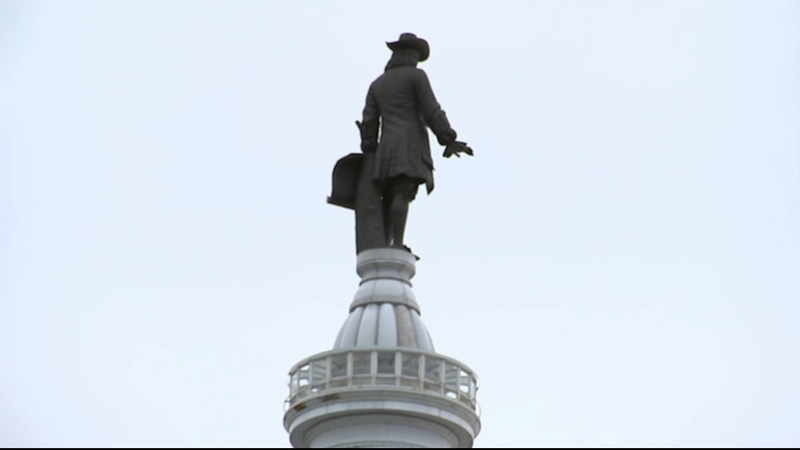 PHILADELPHIA (WPVI) -- Gov. Tom Wolf has activated more than 1,000 Pennsylvania National Guard members to support officials in Philadelphia as the city prepares for a possible verdict next week in the Derek Chauvin trial.

Chauvin is the former Minneapolis police officer who was charged with 2nd and 3rd-degree murder, and 2nd-degree manslaughter, in the death of George Floyd last May.

Closing arguments in the trial are expected to begin on Monday.

Wolf activated the National Guard members by signing a proclamation of disaster emergency on Friday. He said the request was made by the City of Philadelphia.

"This declaration allows the commonwealth to take preemptive steps to ensure the safety of our fellow Pennsylvanians," Gov. Wolf said. "The activation of the National Guard supports the current efforts in Philadelphia to protect our beloved neighbors and city."

Protests were held across Philadelphia following Floyd's death. The most highly publicized incident included the use of police tear gas on protesters who marched onto Interstate 676.

"We should have never used tear gas," Mayor Jim Kenney said. "I'm committed to making sure that we learn from our mistakes, demonstrate accountability, and hold ourselves to a higher standard."

"What is needed is behavioral health support, not an armed response," Kenney said.

Managing Director Tumar Alexander said the city will be operating digital safe spaces for people to connect and "vent and process their emotions in community with other residents."

Alexander also said the city will have volunteers from the Office of Violence Prevention and community volunteers to passively patrol communities to help engage people and offer resources.

Even though the trial of former Minneapolis police officer Derek Chauvin, who is charged with the death of George Floyd last year, is still underway, businesses in Philadelphia are preparing for the potential aftermath of the verdict.

Commissioner Danielle Outlaw said the police department is committed to protecting the First Amendment rights of protesters, but will be prepared for those who seek to commit acts of violence.

"Let me be clear: unlawful behavior will not be tolerated," she said.

To that end, Outlaw said communities may notice an increased police presence, including officers on foot, bikes, and on horseback.

Outlaw said some residents may even see a Pennsylvania National Guard soldier in their neighborhoods.

"Please remember that they are all here to serve you," she said.

Outlaw said some officers will be with department clergy to offer "opportunities for healing."

She noted that officer scheduling has been changed to make sure there are enough officers on the streets in event of civil unrest, and to protect infrastructure, businesses and neighborhoods.

Fire Commissioner Adam Thiel said the emergency operations center is activated and poised to deal with any civil unrest.

"Many other emergencies will be fully staffed starting tomorrow, for the next, we anticipate, the next couple weeks," said Thiel.

Mayor Kenney announced six virtual community healing circles will be hosted over the next three weeks, to provide safe spaces for neighbors to come together in solidarity.

Meanwhile, business owners said they are fearful their businesses could suffer amid possible violence.

Action News spoke with Jayden Hawkins, who said he threw a brick through the window of Nomo Foundation in North Philadelphia during the protests around the death of Walter Wallace Junior, thinking it was a sneaker shop he was looting.

"If I had known that it was a black-owned business, I would never do that a day in my life," said Hawkins, from South Philadelphia. "We need more organizations like this, and it's designed to help me and people that look just like me. If I had the knowledge of that before I would have never thrown a brick through the window."
Report a correction or typo
Related topics:
philadelphiariotprotestgeorge floydphiladelphia police
Copyright © 2021 WPVI-TV. All Rights Reserved.
More Videos
From CNN Newsource affiliates
TOP STORIES