The date written numerically as 3/14 match the first three digits of the never-ending number: 3.14.
ABCNews
By Mary Kekatos What is Pi Day?

SAN FRANCISCO -- Every March 14, mathematicians, scientists and math lovers around the world celebrate Pi Day, a commemoration of the mathematical sign pi.

The date written numerically as 3/14 match the first three digits of the never-ending number: 3.14

Your favorite pizza shop, restaurant or grocery store is likely selling pizzas for $3.14 or giving you a $3.14 discount.

The unique holiday is one that is discussed by math teachers in schools across the country and bakeries and grocery stores often sell pies at a discount that day.

Pi Day was first celebrated in 1988 at San Francisco's Exploratorium, a museum of science and technology that encourages visitors to be hands-on.
The holiday was founded by physicist Larry Shaw, who had been an employee of the museum for more than 15 years. 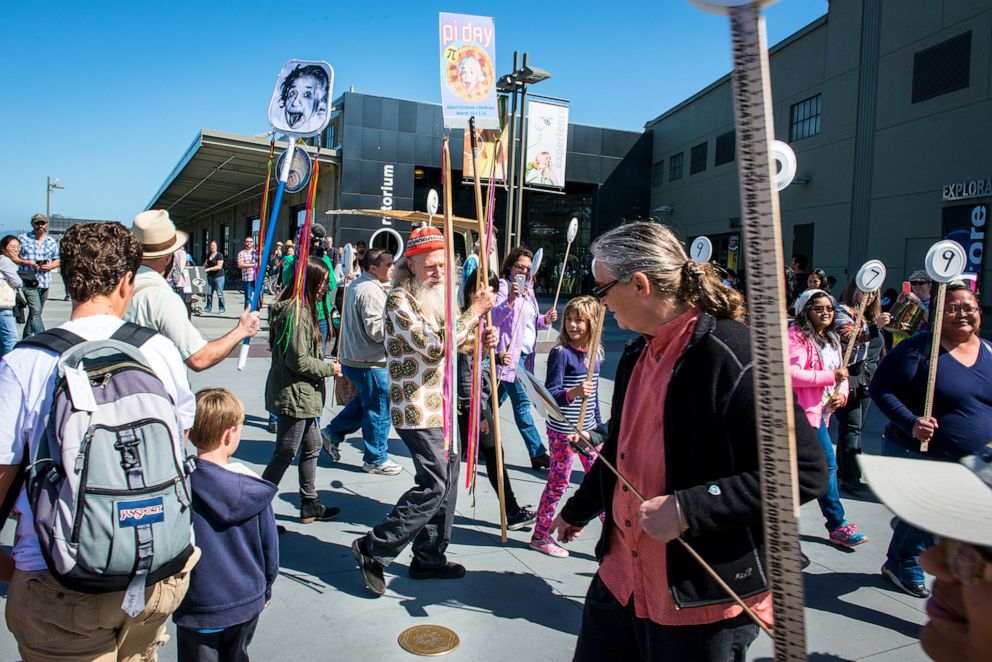 Larry Shaw, the founder of Pi Day, leads a circular procession during Pi Day at the Exploratorium in San Francisco, Tuesday, March 14, 2017. (Exploratorium)

His daughter, Sara Shaw, told ABC News her father was at a weekend work retreat when he came up with the idea to link March 14 with pi's first three digits.

"He always sort of liked to combine crazy, fun ideas with science and math," she said. "It's a celebration and a coming together of everybody to enjoy something that is based in science but in a fun, educational way."

Sara Shaw added, "It's both fun and science, and those things are not mutually exclusive."

Thus, Pi Day was born. During the first celebration, the Exploratorium's employees marched around one of the circular spaces of the museum because pi is the ratio of a circle's circumference to its diameter.

MORE: Indiana once tried to define pi as 3.2. The bill almost passed.

It took place at exactly 1:59 p.m., which are the numbers that follow 3.14 in pi, and, after the march, Shaw and his wife set up fruit pies for the workers to eat.

Sara Shaw said for the first several years, the celebrations were small and only included the workers of the museum and some visitors.

"They used to be pretty small so my memories of them are just like 10 people, and then it grew bigger and bigger," she said. "I moved away for college and then when I came back, it had taken a big leap forward."

Even Sara Shaw contributed to the celebration -- although she doesn't remember doing so. 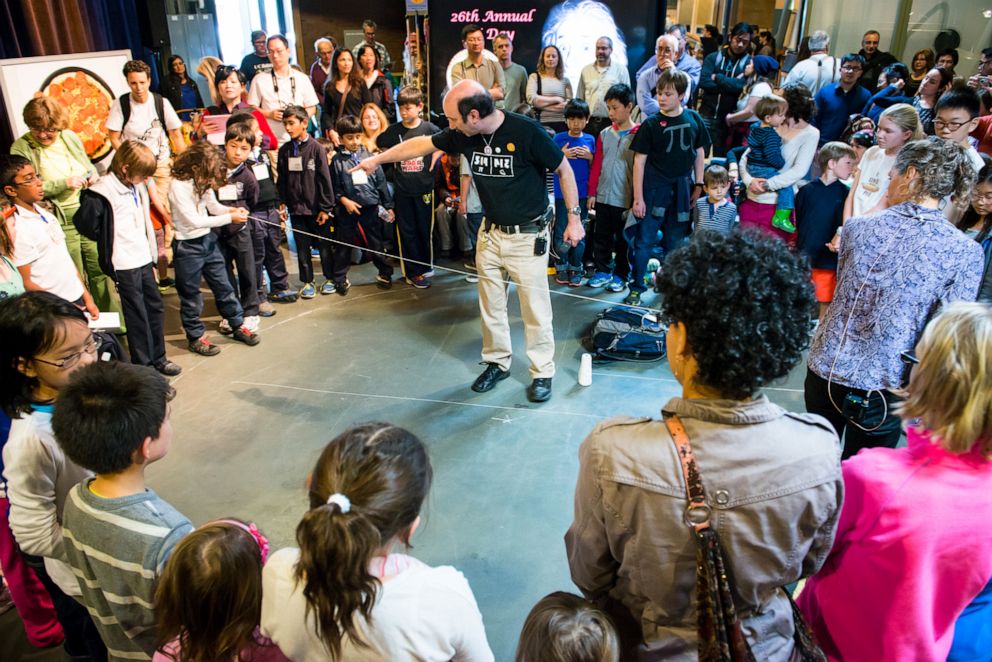 Exploratorium attendees show children how pi is the ratio of a circle's circumference to its diameter during Pi Day in San Francisco, Thursday, March 14, 2013. (Exploratorium)

Her parents told her that, several years after the first Pi Day, she was in elementary school when she realized March 14 is also Albert Einstein's birthday.

For the next Pi Day, Shaw built the so-called "Pi Shrine," which is a circular plaque inside one of the museum's circular classrooms.

The workers then did the traditional march around the museum, ending at the Pi Shrine, which was encircled 3.14 times before "Happy Birthday" was sung to Einstein, according to the Exploratorium's website.

The holiday has gotten such recognition that in March 2009, the U.S. House of Representatives designated March 14 as Pi Day.

"I think he was thrilled that [the day] went from a small and humble beginning to see it grow and grow," Sara said.

Pi Day has become an annual tradition at the Exploratorium, and the staff has carried on even after Shaw died in 2017.

"Pi Day is such a special holiday for the Exploratorium," Samuel Sharkland, program developer at the museum, told ABC News. "It started off as a staff gathering and speaks to its magnetism and interest that it's blown up into an international celebration."

He continued, "Sometimes math can be intimidating. But when you have this charismatic number like pi ... there's a lot to explore."

So why is pi considered to be such an important symbol? 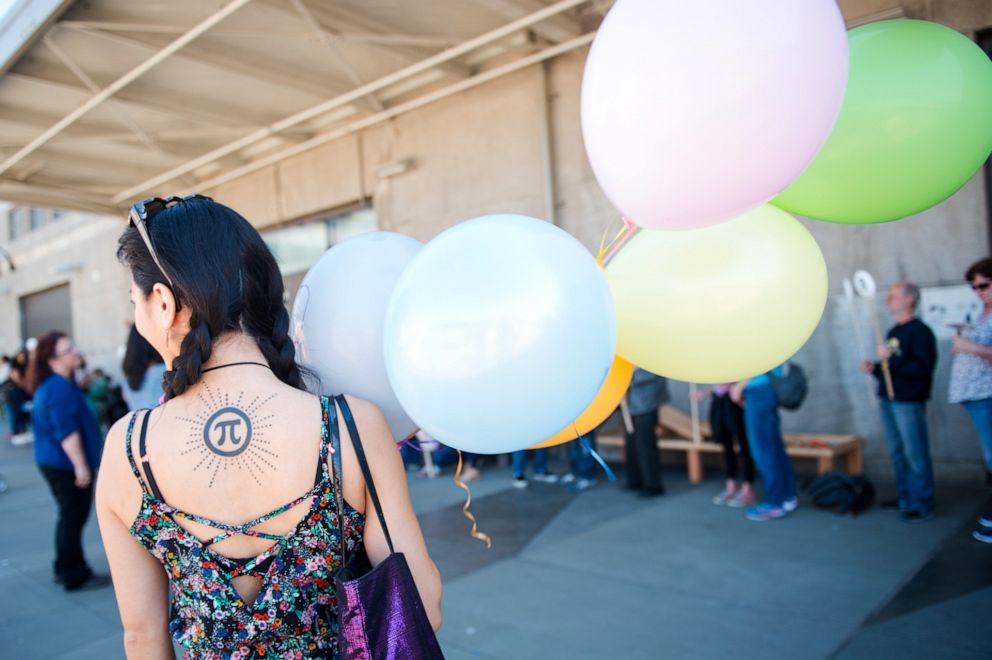 A woman displays her pi tattoo during a Pi Day Celebration at the Exploratorium in San Francisco, Thursday, March 14, 2019. (Exploratorium)

Scientists knew for centuries that, regardless of the size of a circle, the circumference and diameter always had the same exact ratio but were unsure of how to calculate it.

The Greek mathematician Archimedes is considered the first person to accurately approximate pi in 250 B.C. after he created an algorithm, which is why pi is sometimes called Archimedes' constant.

Over the next several years, Chinese and Indian scientists made invaluable contributions to the study of pi, adding more digits, and scientists are still trying to learn more digits of pi to the present day.

But pi has significance outside of mathematics. It's been used to help calculate the orbit of planets in the solar system and examine how ripples in rivers carry energy.

This year is the 35th annual Pi Day celebration at the Exploratorium and the first time the museum gets to hold the event in person since 2019 due to the pandemic.

Sharkland said in addition to the parade, food and music, the museum has invited a math artist named John Sims to be in residency at the museum to curate poetry for Pi Day and other works of art. Sims' artwork will be on display at the museum through March 31. 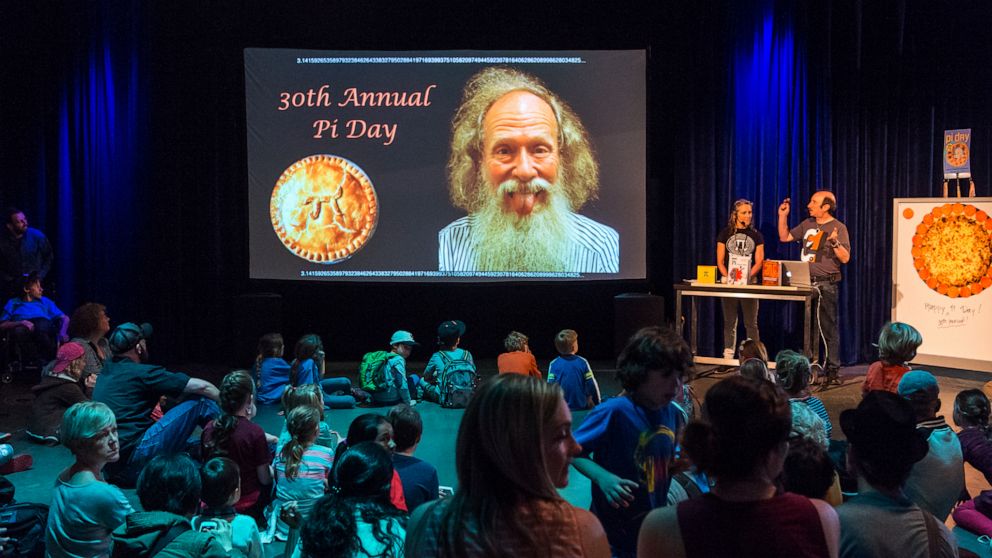 Scientists at the Exploratorium give a presentation about Pi Day during the 30th annual celebration in San Francisco, Tuesday, March 14, 2017. (Exploratorium)

"What Larry Shaw was able to do was to start a culture around pi," he said. "It's important for people to feel connected to the world around us. The more that people can embrace the fun in mathematics via these celebrations like pie or speaking about your slices of pizza pie, is a small step towards feeling connected."

Sara Shaw said she is happy her dad's mission to bring joy to mathematics is continuing and that Pi Day keeps growing every year.

"Unfortunately, in our society, the concepts of science and math are thought of as being boring and tortuous and lame and for him, these things are exciting and fun and he was really good about sharing that with people," she said.
Report a correction or typo
Related topics:
scienceholidaypi daymath
Copyright © 2022 ABC News Internet Ventures.
PI DAY
Indiana once tried to define pi as 3.2; the bill almost passed
Happy 3.14! Delicious Pi Day discounts and freebies
'Pi day' brings pizza shop weddings in Philly
Couples to wed at Philly pizza shop for Pi Day
TOP STORIES
6 dead, 12 injured in Philadelphia weekend shootings
AccuWeather: Turning Cooler & Less Humid
Teen, officer and driver injured after police chase ends in crash
Masks required in Philly School District starting Monday
Texas woman sought in fatal shooting of pro cyclist: US Marshals
4 men stabbed in Tioga-Nicetown
Something strange is happening with our universe: NASA
Show More
Muncy's error allows Phillies to rally past Dodgers
Man shot, killed 'without provocation' on NYC subway: police
3 women wanted in assault, robbery on SEPTA train: Police
78,000 pounds of infant formula arrives in US
Fate of 2,500 Ukrainian POWs from steel plant stirs concern
More TOP STORIES News