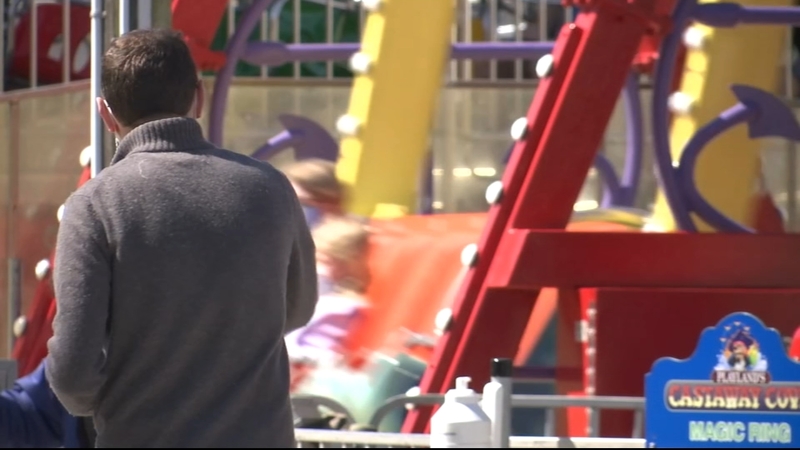 OCEAN CITY, New Jersey (WPVI) -- An amusement park on the Ocean City boardwalk in New Jersey reopened Saturday, two months after a fire left part of the park in ruins.

Playland's Castaway Cove officials say about two-thirds of rides are operational, and the park will reopen on weekends through the spring as crews continue to demolish the building where the January fire started.

They also added that the park will open every day when school lets out in the summer.

"Once people saw the fire, they assumed we were closed for the season, and we weren't going to be able to open, so our biggest goal was to try to get open, let people know we're here, and we're going to be here for 2021 and beyond," said Brian Hartley, the vice president of the park.

The fire burned down the arcade, office building, and one of the electrical rooms. Some rides like the Ferris wheel and bumper cars will still be closed for about another month.

"I've been coming here forever, so sad to see that. But it's going to rebuild, and it's going to be even better," said Evelyn Reyes from Newfield, N.J.

Thousands of people like Reyes came back for the first day, which also looked different because of the pandemic.

Capacity is at 50%, guests have to wear masks, and workers are constantly sanitizing rides.

"It's a great way to kick off the summer and spring. After COVID, being locked up for almost a year, it's just nice getting out," added Reyes.

Kory Kraft from Mantua Township said, "I think it's great. The kids love it, and it's good to get back outside."

Many families say coming to the park is worth it, but some do miss the park's iconic landmark.

"Sad to see without the pirate ship, but they'll rebuild, and they'll be looking great," said Jeff Fuiman from Harleysville, Pa.

The park says the pirate ship will have to be demolished this summer, but they plan to rebuild it in time for the 2022 season.