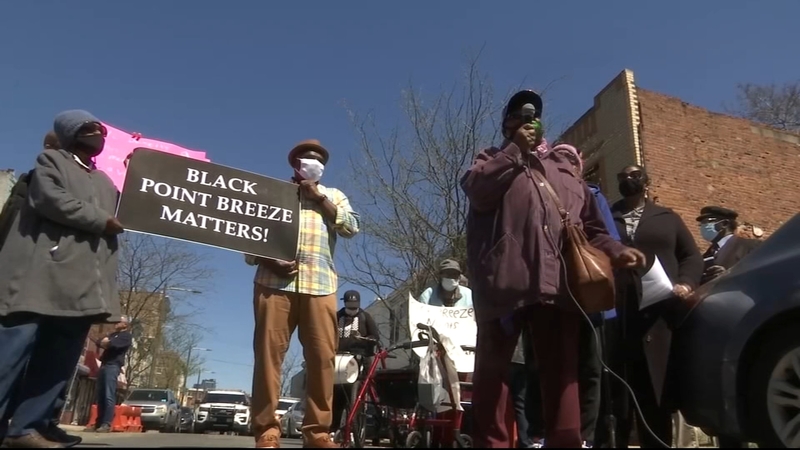 PHILADELPHIA (WPVI) -- Neighbors in Philadelphia's Point Breeze section voiced their anger with elected officials over new development in the community.

They claim a new luxury apartment building is going up without their input and that it is threatening the future for residents who have called the area home for decades.

Protesters stood on the 1400 block of Point Breeze Avenue in front of the very point of contention Tuesday afternoon and demanded answers.

"For many years, these were thriving Black businesses. We want Black economic development, not luxury apartments unaffordable for most of the community," said Connie Walker, an organizer for Black Point Breeze Matters.

Organizer Tiffany Green said, "The problem is that there was no community process, no vote, this is the new Jim Crow development. They're putting us on the back of the bus."

Community members and business owners claim they had no say in the redevelopment.

While Action News did reach out to the developer and did not get a response, many protesters say most of the blame falls on their elected officials.

But Councilmember Kenyatta Johnson, who oversees the district, said the former grocery store is a by-right property.

"The individual purchased the property, and they pretty much have the right to actually develop the property without going through the community process," said Johnson.

Still, protesters aren't buying it. They say if City Council passed the neighborhood preservation overlay bill, which they've been asking for since 2013, they wouldn't be in the predicament that they are now.

Those opposed to the new development said that piece of legislation would make their business historic property, and that neighbors would have the ultimate say about what happens on that property.
Report a correction or typo
Related topics:
societypoint breeze (philadelphia)society
Copyright © 2022 WPVI-TV. All Rights Reserved.
TOP STORIES
Boy, 11, suffers burns during bonfire explosion
Relief coming for residents enduring deafening steam plant noise
Son of Philly police officer shot, killed during apparent robbery
Another volatile day on Wall Street. Is it time to worry?
AccuWeather: Back to the 40s Tuesday
Officials ID victim killed in Montco crash; 4 others seriously injured
Mayor Kenney to undergo heart procedure Tuesday
Show More
Getting paid on Venmo or Cash App? New tax rule might apply to you
Philly sees more graffiti during COVID, but artists say it's an outlet
Tax season officially begins. Here's everything you should know
Introducing Millville, New Jersey's first female mayor
Dad charged and fired from job after racist tirade posted on TikTok
More TOP STORIES News