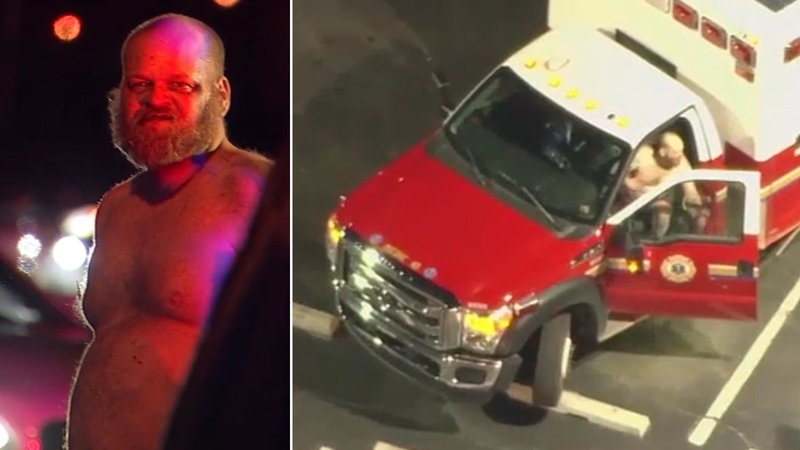 PHILADELPHIA (WPVI) -- Police have identified the man who was arrested after a pursuit involving an ambulance on Friday night in Northeast Philadelphia.

42-year-old Mark Giwerowski, of the 4100 block of Creston Street in the Wissinoming section, is charged with robbery, carjacking, fleeing police, aggravated assault, and a number of other offenses.

Police say Giwerowsk jumped into the ambulance around 9:20 p.m. Friday after officers responded to a domestic disturbance call at the Roosevelt Inn on the 7600 block of Roosevelt Boulevard.

The shirtless man, described as by police as "combative," drove toward a Philadelphia police officer in the ambulance. The officer opened fire, hitting the suspect twice in the leg and once in the side.

Despite the wounds, Giwerowski managed to keep driving. While inside the ambulance, he took control of the radio:

"Do you believe in the Lord Jesus Christ?" he can be heard asking. "I want to get back to the Roosevelt Inn. I want my wife."

He also warns officers to stay away from the vehicle.

"Stay back, I'm telling you. Don't try to open that back door," he can be heard saying.

The chase took police all over Northeast Philadelphia. At least two times the suspect stopped and made contact with officers, only to take off again.

He barreled through a gas station, drove over a median and down one-way streets. A tow truck driver even got involved at one point, trying to collide with the ambulance driver.

Philadelphia police have captured a stolen ambulance suspect after a nearly two-hour chase on Friday night.

The ambulance was tracked by the Philadelphia police air unit and Chopper 6 HD. The ambulance even drove past our Action News crews on the ground.

The pursuit lasted nearly 90 minutes, finally ending in the 2700 block of Tolbut Street where the ambulance stopped on the front lawn of a home.

Giwerowski, wearing only boxer shorts, was taken into custody and brought to the hospital.