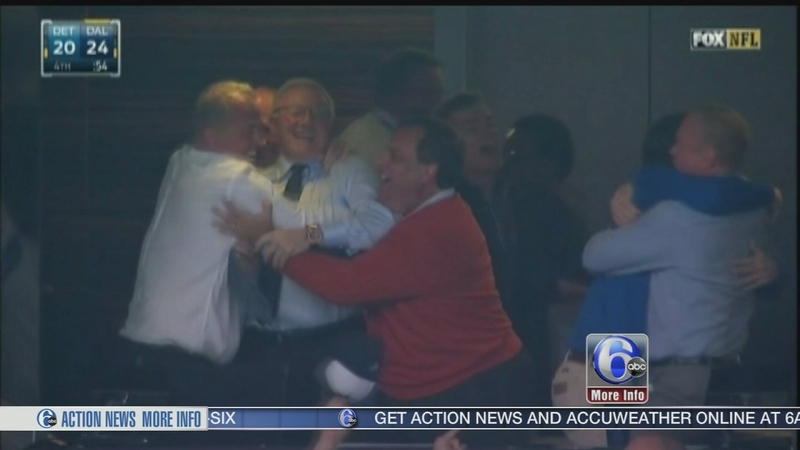 But compared to Sunday night, that hand gesture was nothing.

The sight of the governor embracing Jones whipped up an even bigger frenzy on social media.

Governor Christie has loved the Cowboys since he was a kid. But hang out with and hugging the team owner is costing him here at home, where some football fans feel like he's a traitor.

John Powers of South Philadelphia says, "It's one thing if you are a fan. But to throw it into your constituents faces like that, it just seems wrong."

Video aired on national television of Christie going for an awkward hug with Cowboys owner Jerry Jones after Dallas won the playoffs Sunday. The image has sparked another round of venom on social media from football fans who think New Jersey's Governor ought to be supporting hometown teams like the Jets, Giants, or of course, the Eagles.

Sue Kolarovic of Palmyra tells us, "I'm sorry, but it disgusts me. That's the governor of my state, you know? I just can't see how you can call yourself a Jersey boy if you're a Cowboys lover."

Frank DeFulvio from Mullica Hill says, "He is a representative of our state and the fact that he's out there, it's kind of in your face."

Speaking of in your face, the governor's brother, Todd, pushed back at the haters on his Facebook page, writing:

"To all those non Cowboy fans who have their panties in a ringer because the Governor of NJ is a Cowboys fan---GET A LIFE !!!"

And then to Eagles fans, he wrote:

"Eagles fans---possibly you should worry more about the fact that your sorry [expletive] team has never won a Super Bowl."

Brendan Eicholtz of Aston says, "If he's the brother of a future presidential candidate, maybe he'd want to show a little more class."

But Mike Carpino of Haddon Heights says, "As an Eagles fan, it bothers me a little bit. But as a Chris Christie fan, I guess I can live with it."

Dolores Byrd of Trenton asks, "It's okay for the governor to like whatever team he likes, and that's fine. But how is he paying to get there?"

The governor's office says Governor Christie's ticket was paid for by Jerry Jones - paying for transportation and his ticket - and it didn't cost taxpayers anything.

The hubbub started back in December. The governor was high-fiving Dallas' owner as the Cowboys beat the Eagles, prompting a nasty tweet from Philadelphia City Councilman Jim Kenney, who noted:

"Chris Christie is sitting on his very fat [expletive] next to Jerry Jones in his box at the Linc...Kissing Texas [expletive] for 2016! Awful!"

On a sports radio show Monday morning Governor Christie said he will continue to wear that lucky orange sweater to Cowboys games and makes no apologies for being a Dallas fan.

"What I said to folks down in Philadelphia is I love passionate Eagles fans. That's great. I'm glad they're rooting hard for their team. But just because I'm governor of New Jersey doesn't mean I change who I root for," he explained.
Related topics:
politicstrentonn.j. newspoliticschris christie
Copyright © 2021 WPVI-TV. All Rights Reserved.
More Videos
From CNN Newsource affiliates
TOP STORIES