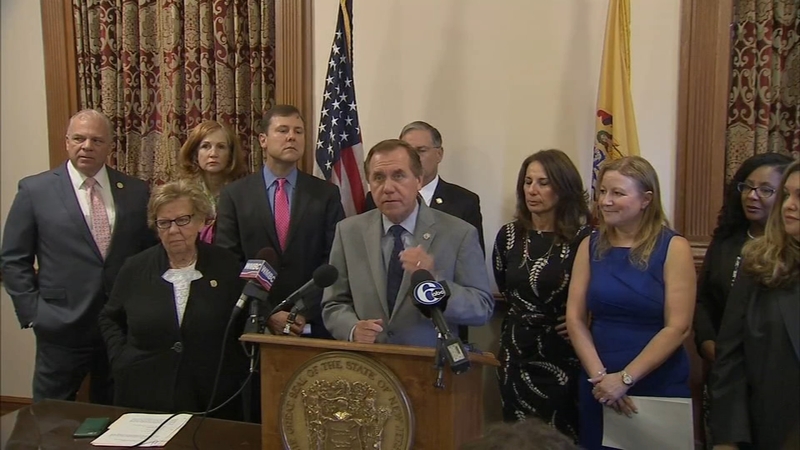 TRENTON, N.J. -- New Jersey's Legislature voted Thursday to adopt its first new anti-harassment policy in nearly a decade, and the first of the #MeToo era.

The Democrat-led Assembly approved the new bipartisan measure without any opposition on a 79-0 vote, followed shortly after by the Democrat-controlled Senate, with a 38-0 vote.

The policy, which lawmakers described as strict and "zero tolerance," supersedes a 2009 document and includes a handful of changes.

It passed as a resolution and goes into effect without action from Democratic Gov. Phil Murphy.

One of the biggest changes is a new requirement for lawmakers, staffers and other legislative aides to undergo anti-harassment training at least every two years.

The new policy also specifies examples of prohibited conduct and spells out a method for final determination letters to become public under the Open Public Records Act.

Assembly Speaker Craig Coughlin, who called for a review of the previous policy, said the fact that highly charged testimony over alleged sexual misconduct in Judge Brett Kavanaugh's Supreme Court confirmation hearing was happening simultaneously was not related.

"After reviewing the previous policy, we knew immediately that more had to be done to encourage a welcoming workplace for all those work for and with the legislature," he said.

But other lawmakers mentioned the testimony of Christine Blasey Ford before the Senate Judiciary Committee directly.

"I might describe it as an appropriate day. I listened to that testimony this morning. I listened to it right up to the minute I came into this hallway," said Majority Leader Loretta Weinberg. "I couldn't find a more appropriate moment for us to be here."

Democratic Assemblywoman Pamela Lampitt specifically invoked the #MeToo movement on the floor during a speech, which garnered a standing ovation.

"We want to empower our daughters," she said.

The policy came after a review by lawmakers who began pushing for updates amid accounts of sexual misconduct as part of the anti-harassment movement that grew out of allegations against Hollywood mogul Harvey Weinstein.

Earlier this year, The Associated Press filed records requests with legislatures in every state seeking information on the number of sexual misconduct or harassment complaints.