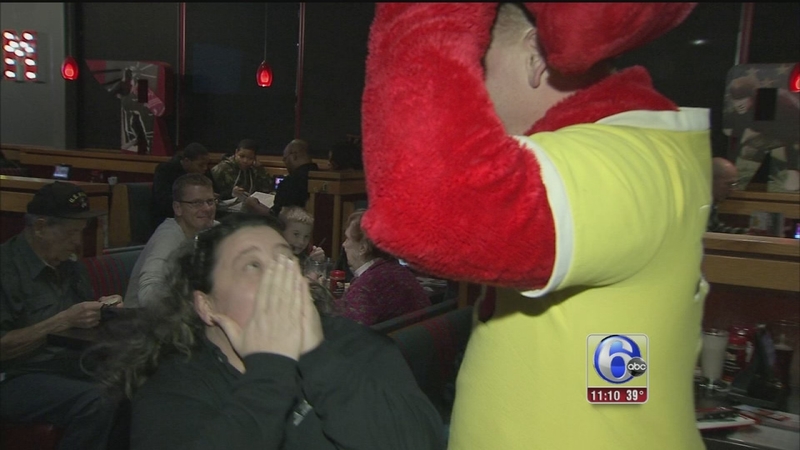 But no one knew about it Thursday night. (Well, Action News did.)

Jake, a combat engineer, was deployed during Christmas in 2013.

His orders to the Middle East were canceled, but he's been stationed at Fort Riley Kansas ever since.

"No one knows that I'm here right now so my mom is probably going to cry. It's going to be fun," Jake said.

The two haven't seen each other in a full year.

To pull off the surprise, Jake came to the Red Robin restaurant in Trevose near his mother's home.

He dressed up as the restaurant's mascot, Red, beak and all.

The plan: To go out to his mother's table where she is having dinner.

First, he greeted other families having dinner to not look suspicious.

Then he moved to that one special customer.

Cheri played along as the mascot began to pick on her.

Then it was time for the big reveal. Jake removed the bird head.

"Oh my gosh!" his mom screamed.

Mom and son were together again.

This mom was filled with joy.

"It's everything because we're all together and when he's not here we're not all together so I'm super happy," Cheri said.

The returning soldier was also happy to see his family and surprise his mom.

"I think it went pretty well. She cried, that's gold, we did good," Jake said.

Private First Class Henry will be home for 18 days.

He also brought two soldiers along with him who could not get to their families for the holidays.