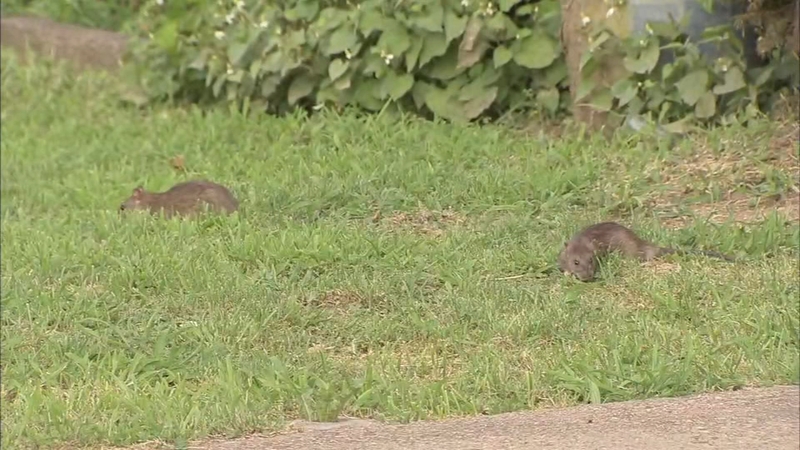 PHILADELPHIA (WPVI) -- Those who live along the 5300 block of Howland Street in the Lawncrest section of Philadelphia are fed up with their new neighbors.

They say rats have overtaken their front lawns, crawling, hopping and darting out at all times of day.

It's enough to force Eric Gerena to rethink his garbage routine.

"They sit in the trash can three and four at a time. I told everybody not to bring any food out; we just bring it out Thursday morning," said Gerena.

He's also bought his own rat poison and deposited around the house.

The neighborhood is now receiving help from the city's Health Department, which provided black plastic traps.

The Health Department hired Vector Control to go door-to-door, inspecting the yards and analyzing the situation.

The company set out traps to catch the creatures and baited the burrowed holes where they hide out.

We're told things weren't always this way, that the problem has recently escalated. There's a working theory among neighbors about why they've moved in here.

"They'll come back, as long as you have the gardens," Joan Reed believes the crops planted in front yards attracts the large rodents. "When you have corn and things like that, you'll have mice, rats and snakes."

The Health Department says there is no immediate fix.

They released a statement Friday, saying in part, "Inspectors were scheduled to revisit the baited burrows today, due to the 3-5 day lag time before they start to see results from the baiting. Inspectors were out there this morning checking the baited burrows, and investigating more. They found burrows on two additional properties and baited them and put down bait boxes. Inspectors will be out there tomorrow to check the bait boxes, as is protocol, as well as following up early next week on the burrows, as is protocol."