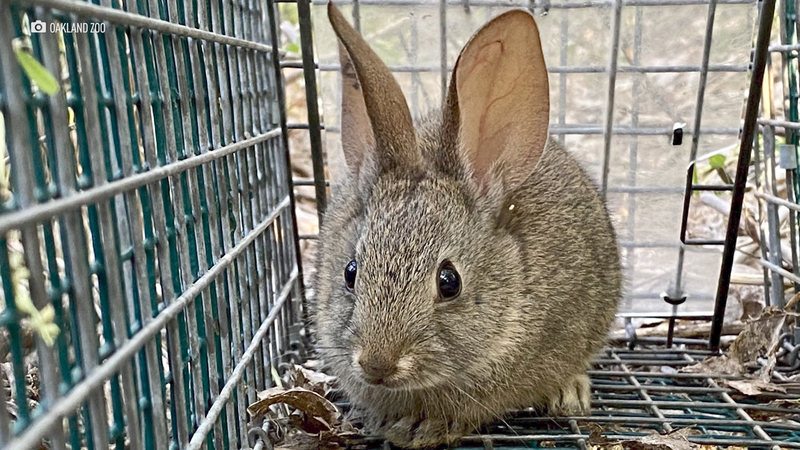 In partnership with the U.S. Fish and Wildlife Service, California Department of Fish and Wildlife, the Oakland Zoo is joining forces to help vaccinate the riparian brush rabbits from the fatal virus and from possible extinction.

The riparian brush rabbits are only found in California's Central Valley and play an essential role in the San Joaquin River's ecosystem.

RELATED: Guide Dogs for the Blind provides independence through the use of trained dogs for the blind

"They impact the community from the vegetation and they also feed the predators," said Deana Clifford, Senior Wildlife Veterinarian at California Department of Fish and Wildlife. "They are what we call a keystone species. Many other species depend on this little rabbit."

According to the Oakland Zoo, the first case of RHDV2 was detected in Riverside, California in May of 2020.

"This virus kills a lot of rabbits," said Clifford. "When it comes into a population, we expect to lose maybe up to ninety percent of the rabbits. The last thing that we want is for this virus to send this rabbit back towards extinction. "

RHDV2 is only harmful to rabbits, but can be carried by birds, insects, and other animals.

Once a rabbit contracts RHDV2, it can take up to several days for the rabbit to die from the deadly disease.

In the fall of 2020, the Oakland Zoo took in twenty wild rabbits for a six week safety trial of the RHDV2 vaccine.

"To be able to just make sure that not only were they healthy, we were able to look at the serology, the blood work from the actual vaccination," said Darren Minier, Assistant Director of Animal Care, Conservation, and Research at the Oakland Zoo. "We're having a lot of success. It's a big effort, but it is really important."

After the safety trial, the Oakland Zoo released the rabbits back into the wild and will be assisting their partners in vaccinating the riparian brush rabbits in their natural habitat.

Currently, there is no trace of the Rabbit Hemorrhagic Disease Virus at the San Joaquin River National Wildlife Refuge, but the U.S. Fish and Wildlife Service, California Department of Fish and Wildlife are closely tracking the virus.

"We don't know how long the virus is going to stay once it is here," said Minier. "It could be years."

The closest case of RHDV2 is 200 miles from the San Joaquin River National Wildlife Refuge.

"It is something that we are doing, real world, and it is having an immediate effect," said Minier. "We know every single rabbit we get vaccinated is one that is going to be saved from the virus and is going to be able to live to reproduce. It is one of the most rewarding programs that we've had so far."
Report a correction or typo
Related topics:
oakland zoovaccinescommunity journalistrabbitall goodendangered speciesconservationabc7 originalslocalishkgooakland zooanimal rescuewild animalsbuzzworthyrescueanimalanimal newsanimalsvirus
RELATED
Oakland artists build tiny homes for unhoused residents
Pups with a purpose serve the blind community
LOCALISH
Kids are the stars of the show at this student-run circus
Enjoy a rockin' good breakfast at this California restaurant
Goal! Hometown youth soccer players head to international tournament
Coffee shop's inspiring founder brews 'daily cup of believe'
TOP STORIES
Philadelphia pastor accused of child sex assault
2 Montco school districts requiring masks starting Friday
Teachers, parents voice concerns over proposed library policy
Boy, 4, shot inside North Philadelphia home
Philly contestant on 4-game Jeopardy! winning streak
DA: Person shot, killed by officer after struggle in Malvern, Pa.
Less than 10,000 GOP votes left to count in Pa. Senate primary
Show More
Beloved kindergarten teacher retiring after 48 years
South Jersey man returning home after walking the world
CDC director signs off on booster shots for children ages 5 to 11
FTC warning: Baby formula scammers are preying on parents
Delaware AG now investigating condemned Wilmington apartment complex
More TOP STORIES News