Wherever Robert Durst goes, trouble seems to follow. In the video, see the incidents that the eccentric millionaire is implicated in.

HOUSTON, Texas -- Robert Durst, the wealthy New York real estate heir and failed fugitive who was dogged for decades with suspicion in the disappearance and deaths of those around him before he was convicted of killing his best friend and sentenced to life in prison, has died. He was 78.

Durst died Monday in a state prison hospital facility in Stockton, attorney Chip Lewis said. Lewis issued a statement reading in part, "We understand that his death was due to natural causes associated with the litany of medical issues we had repeatedly reported to the court over the last couple of years."

Durst was convicted in September of shooting Susan Berman at point-blank range at her Los Angeles home in 2000. He was sentenced Oct. 14 to life in prison without parole.

Durst had long been suspected of killing his wife, Kathie, who went missing in New York 1982 and was declared legally dead.

But only after Los Angeles prosecutors proved that the motive in Berman's death was to silence her because she helped him cover up Kathie's killing was he indicted by a New York grand jury in November for second-degree murder in his wife's death.

An attorney for Kathie's family issued the following statement: "Although Robert Durst has died, the ongoing investigation into those who helped him cover up her murder continues. On January 31, 2022, the 40th anniversary of Kathie's murder, we will provide a further update. In the interim, please say a prayer for Kathie and his other victims."

Los Angeles prosecutors told jurors that Durst got away with murder in Texas after shooting a man who discovered his identity when he was hiding out in Galveston after Berman's killing. Durst was acquitted of murder in that case in 2003, after testifying he shot the man as they struggled for a gun.

Deputy Los Angeles District Attorney John Lewin said jurors told him after the verdict that they believed Durst murdered Morris Black in Texas and had killed his wife.

Durst discussed the cases and made several damning statements including a stunning confession during an unguarded moment in the six-part HBO documentary series "The Jinx: The Life and Deaths of Robert Durst."

The case spans the country and more than three decades. Here are the highlights of some key events in the various cases Durst was connected to.

1980: The couple separated, but did not formally divorce, and according to People, he started dating Mia Farrow's sister Prudence, who was the subject of the Beatles song "Dear Prudence."

Jan. 31, 1982: By early 1982, the couple were living in different apartments in Manhattan, but still shared a cottage in Westchester County, New York. Kathie's friend Gilberte Najamy had a party in Newtown, Connecticut, on the night of Jan. 31, but Kathie left after receiving an angry phone call from her estranged husband.

"She came to the house, she was visibly upset. Things were not going well that weekend. She made phone calls back and forth to Bob, Bob would call the house 'I want you home now.' She didn't want to go," Najamy told ABC News in 2001.

"The last conversation that I had with Kathie was a very powerful conversation and as she was leaving my house, she turned to me and said 'Gilberte, promise me if something happens to me, you'll check it out. I'm afraid of what Bobby might do,'" she told ABC.

Durst told investigators that they got into an argument that evening when she arrived back at their South Salem, New York cottage, but that he drove her to the train station and she headed back into Manhattan. Five days later, Durst contacted police to tell them Kathie was missing.

2000: Westchester County investigators re-opened their investigation into Kathie Durst's disappearance, which at that time was still ruled a missing persons case rather than a murder. The next year, Kathie was declared dead, though, her body was never found.

Investigators were scheduled to speak to Susan Berman, a good friend of Durst who lived in California. But on Christmas Eve, just days before her scheduled meeting with investigators, Berman was found in her home fatally shot in the back of her head.

According to a 2001 New York Times article, Berman's family and friends did not suspect Durst at the time and felt that he would never hurt Berman, who he was so close to that he gave her away at her wedding in 1984.

October 2001: Durst was arrested in Galveston, Texas, for the murder of Morris Black, his 71-year-old neighbor who was found dismembered.

Once police start looking into the murder, they discovered that Durst had rented an apartment in Galveston in April, according to The New York Times. He had told the landlord that he was renting the home for his mute sister-in-law, and gave the name of one of his childhood classmates. Durst was seen dressed up as a woman at the library and at local restaurants.

Durst was charged with the killing of Black, but claimed that he did so in self-defense.

During the 2003 trial, the Associated Press reported that Durst admitted to using a paring knife, two saws and an ax while he was dismembering Black's body, which he later dumped in Galveston Bay. A jury later acquitted Durst.

2004: The AP reported that Durst pleaded guilty to bond jumping and evidence tampering. He was released on parole in 2005. After that, however, he had another run-in with the law when he violated the terms of his parole by returning to the home where he killed Black, which resulted in him having to spend four more months in jail.

2010: His case received renewed attention when a movie titled "All Good Things" was released detailing a fictionalized version of Durst's life, with the Durst character being played by Ryan Gosling. Durst contacted the film's director after its release, and their ensuing interactions result in an HBO series.

July 2014: Durst was arrested in July of 2014 for exposing himself and urinating on a candy display at a CVS pharmacy on Kirby. He later pleaded no contest to a criminal mischief charge and was ordered to pay restitution to CVS.

March 15, 2015: Durst, 71 at the time, was arrested by FBI agents at a New Orleans hotel, a day before the final episode of the HBO series aired.

"As a result of investigative leads and additional evidence that has come to light in the past year, investigators have identified Robert Durst as the person responsible for Ms. Berman's death," the Los Angeles Police Department said in a statement.

In the HBO series, Durst appeared to have admitted to the killings of Berman and his wife, and was heard on audio tape saying that he "killed them all, of course." The audio recording was captured on a microphone he was wearing while he was in the bathroom. The filmmakers said they didn't discover the audio until years after it was recorded.

March 16, 2015: Durst waived his right fight to extradition in a New Orleans courtroom. The Los Angeles district attorney charged him with one count of first-degree murder with the special circumstances of murder of a witness, as well as lying in wait and gun use allegations.

Sept. 2021: A Los Angeles jury convicted Durst in the murder of Berman. The following month, he was sentenced to life in prison.

Oct. 2021: Durst was charged in New York City with the murder of his former wife, Kathie, who disappeared in 1982, according to the Westchester County District Attorney's Office. 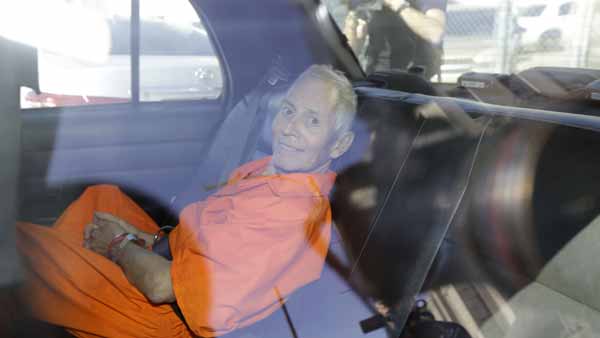