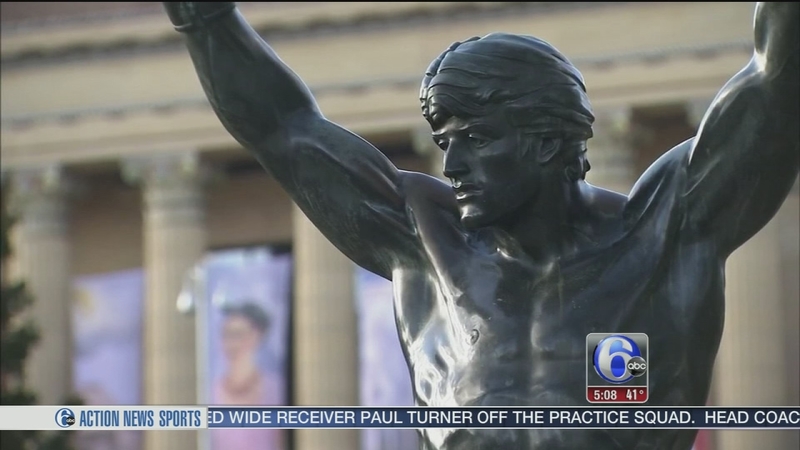 On Monday, tourists and locals alike celebrated the film and its impact on the city.

They're best known as the "Rocky steps". At all hours, in all weather, people come to run them to celebrate a film that premiered four decades ago. And today, Rocky is as much a part of Philadelphia as the Liberty Bell or Ben Franklin.

Up they go, to the top of the Art Museum steps. They raise their hands in their air - triumphantly, just like Rocky Balboa did when the movie first premiered on this day in 1976.

Bruno McKelvey of Norristown says, "They do it all the time - people doing push-ups and stuff. It's cool."

And Devin Desmond of Pittsburgh tells us, "I've been here a bunch of times and I've never done it. It felt like a coming of age moment."

The steps draw people from all over the world, as does the iconic statue of the boxer from South Philadelphia at the base.

Nadia Caraballo comes to Philadelphia from Puerto Rico. She says, "I usually go to museums and I do other kind of tourist things. I had to come. I really love 'Rocky.'"

And Patrick Hardy hails from Ireland. He says, "It's all part of Philadelphia. When you come here you have to do it all."

Written by Sylvester Stallone in three days, the film, like Rocky himself, was a long shot - made on a budget of only a million dollars and filmed in 28 days. It made over $225 million in 1976 alone and won three Academy Awards, including Best Picture.

Darci LaFave of Lake Placid says, "I think it's a great testament to perseverance and overcoming all odds."

Barber explains, "People are just like Rocky, are starting to take us seriously and recognize how great this city is. I think he epitomizes Philadelphia."

Mike Kunda makes a living impersonating Rocky. He lives and breathes the movie - 40 years after its debut.

Kunda says, "Every single time I come to these steps I think, my God, not only Sylvester Stallone, but the entire crew reached and inspired a planet."