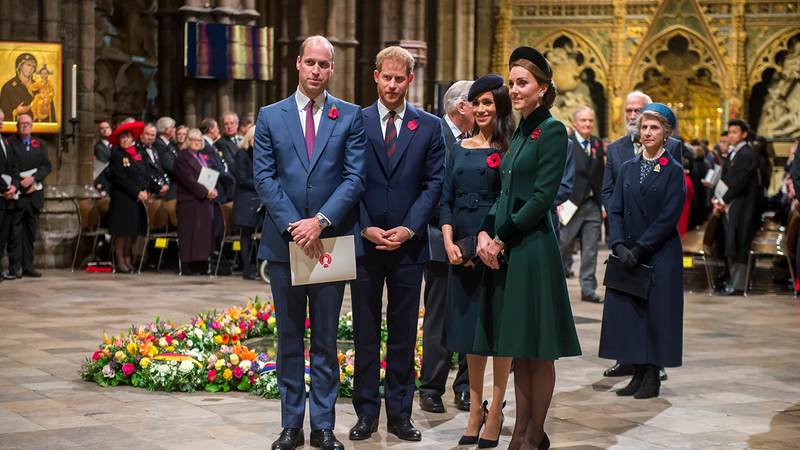 An "explosive argument" between Princes William and Harry led to William initiating the split of their households and the ultimate breakup of the so-called "Fab 4," a new book claims.

When it was announced two years ago that Prince Harry and his wife Meghan, the Duchess of Sussex, were departing from Kensington Palace -- the household of Prince William and his wife, Kate, the Duchess of Cambridge -- to form their our own household, it was assumed the Sussexes were looking to start fresh as they launched their own initiatives and prepared for the birth of their first child.

But historian and royal expert Robert Lacey, author of the new book "Battle of Brothers," claims it was William, not Harry, who initiated the split.

Citing palace insiders, Lacey writes the two brothers, the only children of Prince Charles and the late Princess Diana, had an "explosive argument" about the way Meghan was reportedly treating palace staff.

Harry reportedly hung up the phone on his older brother, leading William to address him in-person.

After the argument, William reportedly instructed a royal aide to "start the process of dividing their two households immediately," according to the book.

"William wished to be separated from Meghan on a day-to-day basis and that meant being separated from his brother as well," Lacey writes, also quoting a friend as saying that William "threw Harry out" of Kensington Palace.

Prince Harry and Meghan, who wed in 2018, stepped down from their roles as senior working members of the royal family in 2020, one year after their split from the Kensington Palace household.

Earlier this year, the bullying allegations made against Duchess Meghan spilled into public view. Buckingham Palace, which represents Harry's grandmother, Queen Elizabeth, announced plans to open an investigation into the allegations of bullying made against Meghan, a move that one royal expert called "incredibly unprecedented."

Harry and Meghan have strongly denied the bullying allegations, calling a media report of the allegations a "defamatory portrayal of The Duchess of Sussex."

Prince Harry and Meghan, Duchess of Sussex, will attend on Saturday night what is expected to be one of their final events as a working royal couple as they prepare to stand from their royal duties at the end of the month.

The bullying allegations were made public just before the Sussexes sat down for a tell-all interview with Oprah Winfrey.

Prince Harry implied to Winfrey in the interview that jealousy over his and Meghan's successful trip to Australia and the South Pacific in 2018 could have been the reason for the shift in relations between his family and the Cambridges.

Harry implied the trip was similar to a trip his mother Princess Diana took abroad with then-husband Prince Charles. Diana died in 1997, shortly after her divorce from Charles, following a car crash in Paris in which she was chased by paparazzi.

"My father and my brother, Kate and all the rest of the family, they were really welcoming," he said. "But it really changed after the Australia tour, after our South Pacific tour."

When asked by Winfrey if he was saying there were hints of jealousy, Harry replied, "I just wish that we would all learn from the past."

Neither Kensington Palace nor representatives for the Sussexes, who now live in California, have commented on the allegations made in Lacey's book.

It is not known what, if any, steps toward reconciliation the two couples have made since the Sussexes' departure from royal life one year ago.

When Duchess Kate was asked nearly a week later if she had met Lili yet via FaceTime, Kate replied no.

The two wives, Kate and Meghan, have not seen each other in-person in over a year. William and Harry's first in-person meeting in over a year happened in April, when the royal family came together for the funeral of the brothers' grandfather, Prince Philip.

William and Harry are set to be reunited again next week at the unveiling of a statue for their mother at Kensington Palace. The unveiling will take place on July 1, what would have been Diana's 60th birthday.