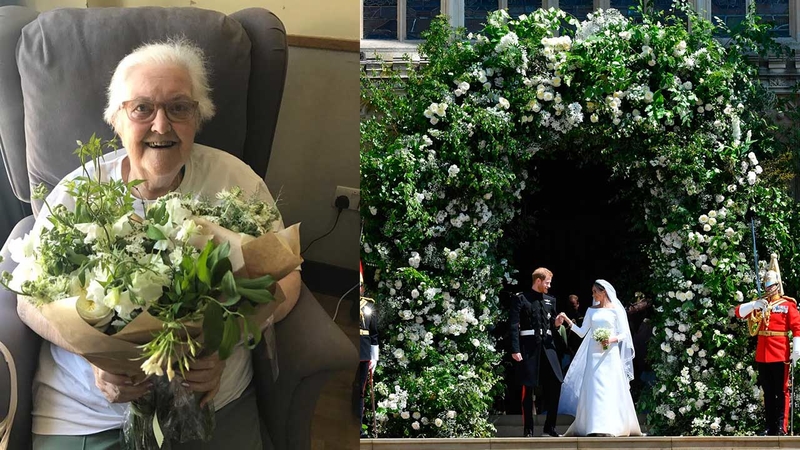 There's a sweet link between the flowers at Duchess Meghan's wedding and Queen Elizabeth II's wedding dress, and her name is Pauline Clayton.

On Sunday, a bouquet containing flowers from the 2018 royal wedding was delivered to St. Joseph's Hospice, Hackney for patients to enjoy. Among them was Clayton, 89, who helped embroider the queen's wedding dress.

"With my royal connections it's such a lovely coincidence to be at St. Joseph's and receive these wedding flowers. They are beautiful and very special," Clayton reflected.


Clayton, currently a respite care patient at St. Joseph's, was just 19 in 1947 when she helped make the queen's dress. Working for Norman Hartnell, who designed the dress, Clayton helped to embroider the 15-foot train, according to St. Joseph's. The look was said to be inspired by the Boticelli painting "Primavera."

From the puffy sleeves of Princess Diana's dress to Kate Middleton's elegant satin and lace gown, here's a look at what several brides wore during their royal weddings.

"We were on rationing then so we weren't allowed to sew on any embellishments so the train was embroidered. There were four of us girls working on it and we earned 49 and a half hours overtime doing that!" she reflected of the wedding. "I really liked working for the Queen Mother, and I helped to make many of her dresses during my 20-year career with Norman Hartnell."

The flowers from Saturday had another connection to Queen Elizabeth II's wedding. The bridal bouquet included myrtle sprigs taken from a plant grown from myrtle used in the 1947 wedding bouquet. Duchess Meghan's bouquet, which included several flowers handpicked by Harry from the private garden at Kensington Palace, also had forget-me-nots, Princess Diana's favorite flower.

Following royal tradition, her bouquet was laid on the grave of the Unknown Warrior in London's Westminster Abbey.

It was announced ahead of time that some of the event's flowers would be donated to charity. Nigel Harding, chief executive of St Joseph's, thanked Craddock and her team, as well as the royal couple.