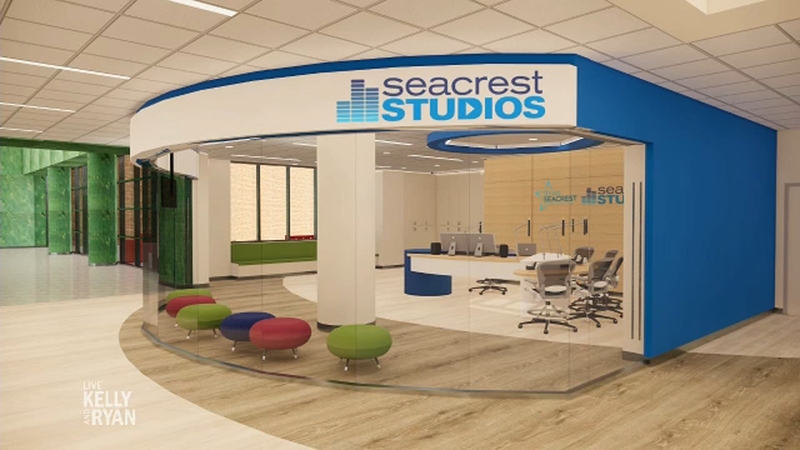 NEW YORK -- Ryan Seacrest's family was in the audience of "Live with Kelly and Ryan" on Thursday for a big announcement.

Seacrest, alongside guest host Elizabeth Banks, announced his family's charity was opening its 11th media studio inside of a children's hospital.

"So we came up with the idea of building media centers in children's hospitals, like TV radio studios," he said. "We started a decade ago in Atlanta, and we've built 10 across the country. And today, we're announcing our 11th studio, which is going to be in Orlando."

This one is set for the Orlando Health Arnold Palmer Hospital for Children.

"And it will be, hopefully, an escape for the patients that are there and their families," Seacrest said. "They'll have to chance to create their own shows, their own broadcasts. I'm sure they're going to have friends from Disney World drop by, and also music stars and celebrities, movie stars who are in the area, to allow them to tap into their creative brain."

Seacrest's mother, father, and sister Meredith were also very involved in getting this 11th Seacrest Studios underway for the children.

"And everything that they do, happening in the studio, it's also transmitted up to all the rooms within the building," Seacrest said. "So for patients who can't get out of their bed, they can be a part of it. They can call into the studio from their phones, totally interactive and totally all inclusive."

Their efforts began 10 years ago, when Seacrest was inspired by the children at the hospital in Orange County.

"These are bright kids with ambition, so we came up with the idea of building media centers in children's hospitals, like TV and radio studios," Seacrest said.

He feels they provide a welcome distraction from their treatments and ailments and that it gives the kids something productive to do that isn't just TV and video games.