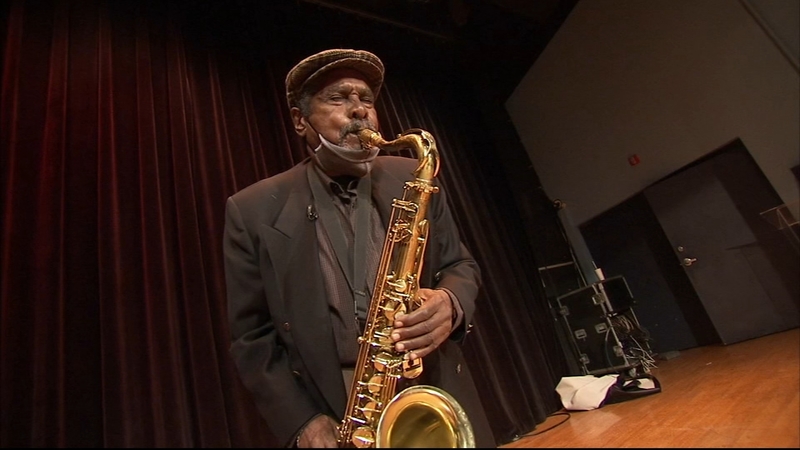 PHILADELPHIA -- With a last name like Reed, Sam Reed may have been destined to be a woodwind musician.

"I play alto, tenor, flute, clarinet," he said. "The time when I was going to school you had to play all these instruments to be a musician."

The saxophone became his main instrument and jazz became his genre of choice.

"It just gives you freedom as far as expressing yourself musically," said Reed.

Reed started out playing the piano, but in junior high school he learned to play the alto saxophone. "Eventually I started playing a tenor," he said.

Growing up in the Point Breeze neighborhood of Philadelphia, Reed met others with similar musical interests, like the Heath Brothers. He says Jimmy Heath became his mentor.

"The era that I was a teenager was basically the jazz era here in Philadelphia," said Reed.

He went on to play in the big bands in clubs across the city and eventually the world. Reed played with many groups throughout the decades.

Reed says he became known for his ability to add music to arrangements as he played, just by using his ear. "It's called the ad lib," he says.

In 1957, Reed started playing at the Uptown Theater, then known as a rock and roll venue.

"I knew all the musicians in Philadelphia and I could get a band together," said Reed.

He says that is exactly what he did, with much success, when Jackie Wilson came to the city for a show with only a drummer.

"That was the start of the Sam Reed's Band at the Uptown Theater," said Reed.

He became the bandleader in 1963. He brought in more jazz and helped to usher in the Motown sound.

"Smokey Robinson, the Temptations and Gladys Knight - all those people were coming in," he said.

Reed says he was fortunate to play with a lot of great musical talent over the course of his career.

He was handpicked by Teddy Pendergrass to be his bandleader in the 1970s. He also played a local one-night show with Billie Holiday on Roosevelt Boulevard - an experience he describes as "very special," because he says he knew who she was.

Reed has mentored musicians at the Philadelphia Clef Club of Jazz and Performing Arts through the years and continues to play sax with various groups across the area.

"I've always had fun playing with different people," he said. "I'm just so happy to be here and still playing my music."